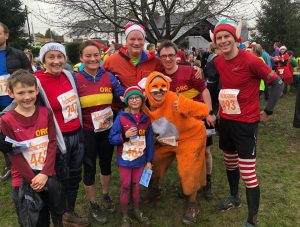 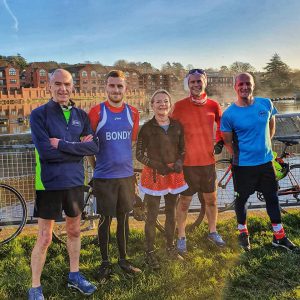 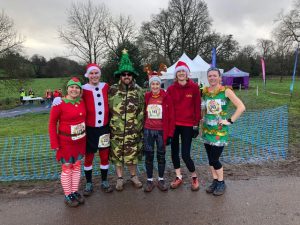 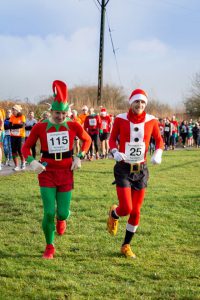 At the Plym Trail Christmas Trail Races on Saturday Okehampton had runners in both the Half and full Marathons. Starting at Clearbrook near Yelverton the course is an out and back along the cycle trail, doubled for the marathon. Emma Dean was the first ORC home in the Half with a strong run, finishing in 1.50.50, followed by Jessica Guscott in 2.00.14. Robert Richards didn’t have such a good run with a calf niggle slowing him on the return miles and finished in 2.09.58. Roger Voaden was the lone club representative in the Marathon, finishing 4th in 3.18.33.

Wild Running’s Dark Dart Dash on Saturday evening made Christmas feel that bit closer with its festive dress code. This trail race loops around the grounds of Dartington Hall, providing 1K, 2K, 5K, and 10K routes with mud in plentiful supply. ORC was represented in the 2K, 5K and 10K races with junior members Aiden and Kiera Spinney in the 2k race, 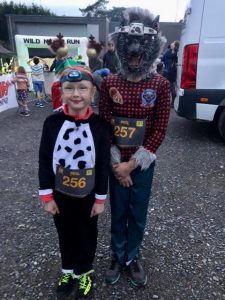 where Kiera came 3rd in her age category in 11.29 with her brother 4th in his category in 10.44. In the 5k Phil Turner finished in 43.55, while Karen Vallance took 2nd in her age category, finishing with her daughter Jasmine and Ali Holiday in 48.02. Jeremy Tandy was the first ORC home in the 10k, coming 2nd overall and 1st in category in 46.33, while Jo Turner was third in her category in 1.05.24. Phil Spinney, dressed as a Ghostbuster, finished in 1.15.20, scooping one of the best fancy dress prizes along with Jeremy who was dressed as an elf. 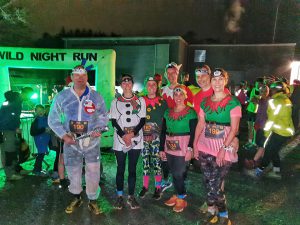 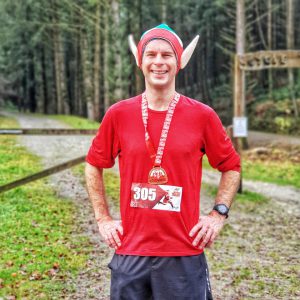 This provided Jeremy Tandy with another opportunity to run as an elf, this time coming 3rd in the 10k race in 40.44 over well maintained forestry tracks.

Jo Page took to the beach for her race on Sunday, running the Weston Christmas Cracker at Weston-Super-Mare. 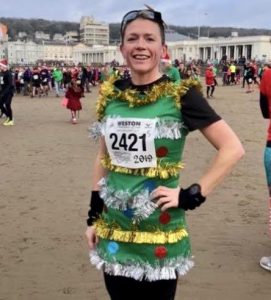 Dressed as a Christmas tree, Jo battled with the headwind on the exposed beach, finishing first senior lady in 47.38.

The third race in the Westward League series was held in Exeter on Sunday, hosting the Devon X-Country Championships. On a cold but sunny day ORC had a good turnout who produced some great performances. The men were really on form with the first three finishers of Robert Kelly, Andy Vallance and Paul Crease taking the 1st Vet team prize. Individually, Robert was 3rd MV35, Andy 3rd MV40 and Paul 2nd MV45. 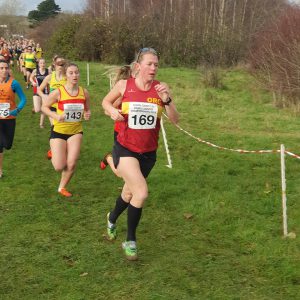 The senior team of Richard Davies, Geoff Hill and Jeremy Tandy also took third place.The ladies team weren’t at full strength due to injuries, but ran well with Claudine Benstead winning the FV60 category but the vet team were just out of the prizes, finishing 4th. There were some new runners in the junior events with Maddie Burrows and Neve Webber having their first outing for the club.

The previous Wednesday was the Exeter and District versus East Devon School’s X-country Championships In Exeter. Qualification at this event would take the runners to the Devon selection later. With Sam Priday and Harrison King representing yrs 10/11 and Matthew Richards yrs 8/9 they all ran well, Sam finishing 2nd, Matthew 4th to both qualify and Harrison 27th.

Kate Wilson and Jackie Dawes travelled to Florence for the marathon on 24 November. 11,000 runners crammed into one of the city’s narrow streets for a mass 8.30am start. The route followed the river Arno through a large city park and into quieter residential districts before leading back into the winding streets. 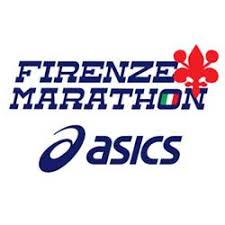 The race’s tagline is “We Run In Art” and the route takes in some of the city’s most iconic sights, including the beautiful Ponte Vecchio bridge which the runners cross shortly before halfway. The cracked and cobbled pavements make for some tricky running and are very unforgiving. The race ends at the magnificent Duomo (cathedral). There was a can of beer in the goody bags and lots of post-race cake. Jackie was very pleased to do another sub-four, coming in at 3hrs 55 mins. Kate was battling dodgy guts (necessitating many loo stops) and was quite disappointed with 4 hrs 22 mins, even though it was a PB. Despite tired legs, they both managed some dancing to cheesy Europop and disco classics at the post-marathon party.

Another ORC on tour this week as Robert Richards who ran a 10k in Spain. The race was the Akiles 10k in Casa De Campo, 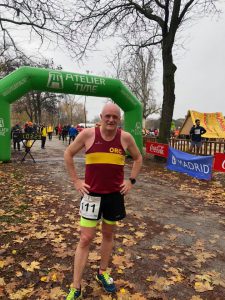 a scenic run through the rolling Central Park in the shadow of the Royal Palace, the former hunting grounds of the royal court in the capital Madrid. Robert finished in a time of 55:04 in weather more akin to Britain of cold and pouring rain.

Sunday saw the final day of Okehampton’s Couch to 5k course, ending with a 5k Time Trial for the runners to prove they could indeed run 5k now. Unfortunately some were not able to take part, but those who did were rewarded with a certificate saying they had completed the course. Congratulations to Rob Cunnington, Gemma Haines-Lawson, Becky Hawkins, Jodie Monnox, Evie Woods and Sarah Angel. Following this some of the present members from various groups took the opportunity to set a 5k time for their awards. 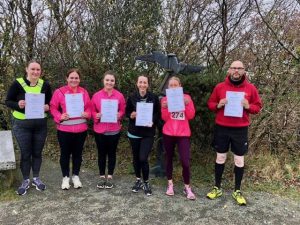 On Saturday Jeremy Tandy travelled to Ham Hill, Somerset, for Flying Fox Running’s “Run from the Romans” 10-mile night trail race. Route-following by head torch was made more challenging due to fog, making it difficult to spot the reflective course markings at times, so much so that Jeremy took a wrong path during the second lap. 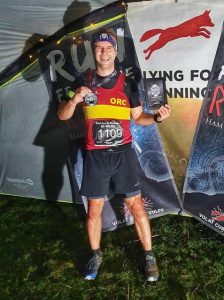 Fortunately he got back on course, overtaking those who had slipped by him to finish in third place in 1.17.58.

Jane Richardson and Janet White enjoyed trails, hills and some deep gloopy mud when they ran the 10mile Bicton Blister on Sunday. Starting and finishing at Bicton College, after a short road section the route follows trails across the sandy, stony and sometimes muddy paths of Woodbury Common, an Area of Outstanding Natural Beauty. Both ladies enjoyed their runs with Jane finishing in 2.03.41 and Janet in 2.09.45. 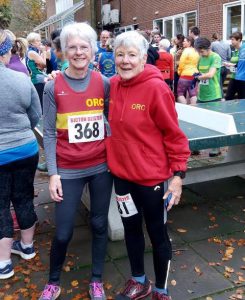