Nicola Smith and Lora Medland took part in their first marathon last weekend. Having never run the distance before, and not being very comfortable with trail running, they still chose to run the off road Bad Cow Marathon in Dorset as their first. This event, organised by White Star Running, is one of their Weekender events with options of different length races over two days, and is held on the fields and heathland of Holton Heath Nature Reserve near Poole. Just to add to the challenge, Nicola and Lora chose to run the 10k race the evening before the marathon, which they completed in 1.04.45 in very windy conditions. Both races were a series of 5k loops and they regarded the 10k as a chance to get used to the terrain and prepare their legs for the marathon the next day. After two laps the evening before and eight for the marathon they decided they were perhaps a bit over-familiar with the route! With great determination and fuelled by jelly babies and Coke, they completed the marathon together in a very respectable 5hr 21min 11sec.

Christine Fritsch was also running a challenging race on the more familiar terrain of Dartmoor on Sunday. This was the second running of the Dartmoor Volcano Race, organised by pureTRAIL Running, a 10.25 mile race with over 500 metres of ascent, taking the runners over the highest point in the south moors, Ryders Hill. Starting in Scorriton, the first three miles were all uphill with the runners taking in The Volcano, a pyramid of a spoil-heap from the disused Red Lake china clay works which made for a stunning focal point for the race, at mile six. In wet, misty conditions Christine loved the boggy, hilly terrain, finishing in 2hrs 6min 12sec.

This coming weekend sees the third race in our summer series, the Oke Croak! This is a challenging 10mile plus route across Dartmoor, including over 2000 ft of ascent. More information can be found on the OkeyRaces website: okeyraces.com
Many thanks to Jane for the run report.

Several ORCs saved their legs to run the Totnes 10k the next day. This multi-terrain race was described as flatish with one hill, but but in reality this was a tough 10k with an undulating course, a couple of steep hills following twisting paths through fields, woodland and riverbank trails. Roger Voaden was the first ORC home in a very good time of 40.39 to take the 2nd MV50 prize. Jane Jackson was the first of the two ORC ladies finishing in 54.14, to claim 1st FV60 and just 2 seconds short of the FV60 course record with its £25 prize!

Kerry Morashti took a day trip down to Fowey on the Cornish coast last Saturday and ran in the nearby Tywardreath Trotter in the evening. Since the inaugural event in 2006 the race has attracted more and more runners and now is part of the Cornish Multi Terrain Race Series. It is renowned for its warm, friendly atmosphere and great scenery with the seven mile course taking in green lanes, bridleways and some tough hills. On a lovely summer’s evening Kerry enjoyed the race finishing in 1.17.11. 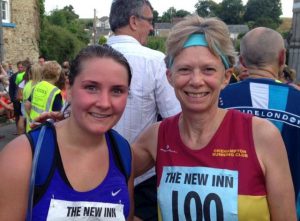 The Run Exe 5k Series has been running throughout the spring and summer and there has been ORC representation every time so far! This time Roger Voaden, Nick Seccombe, Rob Kelly and Stuart May took to the course. Good times were recorded by all, but a big hand to Rob who, after a dry spell of 3 years for PBs, set an excellent new PB of 18:01.