In another busy weekend of racing Okehampton runners were to be found dotted all over the country taking part in different races. It was 9.00pm on Friday night that Robert Richards started his race, the North Coast 100k, following the coast path from Barnstaple to Minehead. The route starts with an exciting night time start in Barnstaple. The town lights soon get left behind as he enjoyed the only flat section of this route along the Taw estuary before climbing the first hill above Saunton Sands and on to Woolacombe Sands. 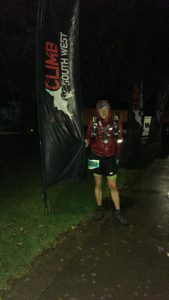 From here on, the hills increased in size and frequency as he passed Bull Point light house, Lee Bay an on to a short section through Ilfracombe. A another couple of hills before he reached the stunning Water Mouth Cove and the half way point in Combe Martin.
The route took him past Hollow Brook – one of the highest waterfalls in Britain which drops 200 metres to the sea. He also passed through the twin villages of Lynmouth and Lynton, then just after Porlock Bay, the path flattens behind marshland, these wetlands have helped ‘preserve’ an ancient forest.
A few more ups & downs of exposed path, woodlands, sharing his journey with sheep, ponies, and cows then popping out in Minehead, a mere 108km from where he started!
With over 10,000ft of elevation this was always going to be a tough challenge, but Robert stuck to his task with great mental strength, despite the fatigue, completing in 23hr 25min.

Jo Bradford chose Chester for her Autumn marathon where heavy rainfall had led to a change of start point and route, the racecourse being too waterlogged to use. Jo had only run her first marathon in the spring and this was a much tougher course, with a strong headwind and rain in the second half making it even harder. Jo is a determined runner and having had her club age category record snatched away last week, she put in a sprint finish over wet cobbles to take it back by 17secs, setting a new PB of 3.48.04.

At the Cardiff Half Marathon there were thee ORCs taking part. Despite not feeling well, Hayden Bond was the first home for the club finishing in a great time of 1.24.40, but disappointed that he hadn’t been able to achieve his target time. 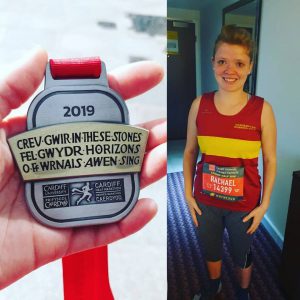 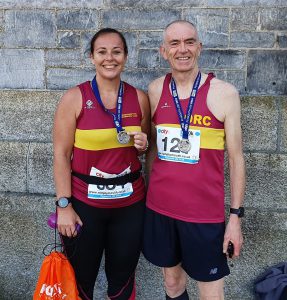 Under pretty much perfect conditions of sunshine and a gentle breeze, two ORCs were among 3,000 runners who set off in the Plymouth 10k, where the route takes the runners from the City Centre, and heads out towards Plympton, before looping back to the City Centre and the finish on Royal Parade outside the Guildhall. Dave Bates was pleased to shave enough off his PB to come in under 44mins for the first time, finishing in a great time of 43.43. Katie Sherjan improves with each race and was very happy to knock a huge 3 minute chunk off her 10k PB to finish in 1hr 08min.

It was the first fixture of the Westward League X-Country Series on Sunday, held at the Plymouth venue where for once the conditions were pretty good underfoot and the weather was kind. There were a good number of ladies representing the club with several newcomers to the series and there were new faces in the junior teams too with Ollie King, Aiden and Kiera Spinney and Quincy Mathews all taking part for the first time.  All the juniors put in superb efforts with the new runners enjoying the experience and looking forward to the next one. Mathew Richards who ran in last year’s series has got stronger over the year and ran a really impressive race to finish in 7th place in the U15’s. Jo Page headed the ladies team home with Claudine Benstead not far behind. League rookie Emma Dean had a great run despite having last week’s marathon in her legs with the other newcomer, Katherine Murray, following her home. Karen Gear, Mags Jarvis, Gill Spinney and Christine Fritsch also ran well. There were only two men running for the club here with Stuart Page coming home ahead of Ian Page.

Okehampton’s Mike Westland took a step into the unknown when he took on his first marathon at the age of 62. 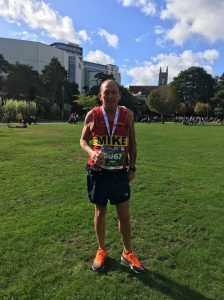 Running the Bournemouth marathon in what turned out to be very warm but windy conditions he ran well, enjoying the support of the crowds, but finding it tough from mile17 where the headwind made it hard to keep to his pace. However he recorded a great time of 4.07.47 to set a new club age group record and come 6th in his age category. 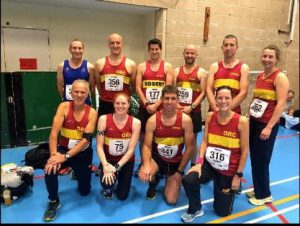 The local and relatively flat Barnstaple Marathon / Half Marathon was a popular destination for several ORC’s this weekend who came back with some amazing results.
The pre race warning of rain and wind didn’t disappoint, rain greeting runners on the start line and at several points during the run, along with strong winds. Despite the weather, some fantastic times were achieved. Rob Kelly romped home to win his first race in a hotly contested Marathon (2.51.04), all three podium members were in with a chance until Kelly blew them away with a sprint finish. First female home for the club was Katie Littlejohns who scooped the first senior lady prize with 3.27.19.
A special mention also to both Jo Page and Claudine Benstead who scooped first senior lady and first vet 60 lady respectively for the half marathon distance.
An enjoyable day with some fantastic results and achievements, too many to list in dispatches, all times listed below. Well done all! 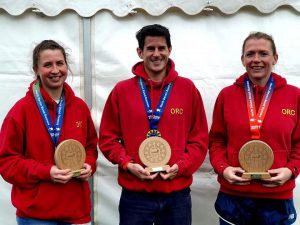 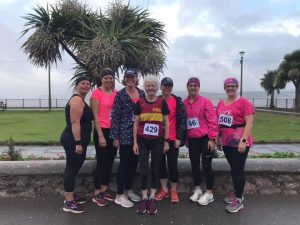 7 ORC’s braved the wet and blustery conditions at this weekend’s well attended Bradley’s 10k Exmouth. The high winds and the waves were crashing over the sea wall but the team took it all in their stride. Jane Richardson was first ORC home with an incredible PB of 57.32 which is a platinum time. Just behind her was Vicky Bond with a time of 58.26. Vanessa Keast and Lauren Bond came in at 1:07:00, also a PB for them both. Cheryl King, Lynsey King and Jo Teixeira crossed the line together at 1:11:00. For most of the group this was only the 2nd time to attempt this distance after completing the couch to 5k last year, now all we can say is.. what’s next? 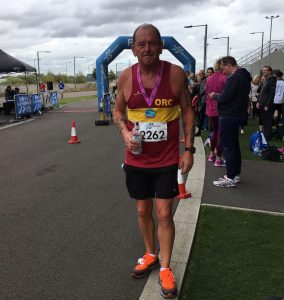 A fellow ORC, Mike Westland on a family trip to London competed in the Lee Valley Velo Park series 10k race. On this moto GP styled race circuit, Mike stormed his way around attempting to beat his personal best. set in Lee Valley’s Velo Park, a normal home for BMX cycling, this was his second opportunity to run the route on this spectacular one mile circuit at Olympic Park. Mike came in with an impressive 49.48mins which was 22 out of 133 runners and first in the mv60 category