The Wild Night Run series resumed after its Christmas break with the Moonlight Flit 10k on Saturday evening. Three Club members braved the cold January night to take part in this tough, hilly run across moorland tracks. Luckily the forecast for heavy rain proved incorrect and they came home dry except for their feet. Christine Fritsch was the first home for the club with a really good run to finish in 1.17.24, moving her up into second place in the overall series standings for her age group. The other two, Jo Bradford and Geraldine Walter, ran the race together, finishing in 1.25.35.

Sunday saw the fourth race in the Westward League cross-country series, this one taking place on the flat and exposed fields of Northam Burrows at Westward Ho! Any expectations that a flat course is an easy one to run are soon dispelled by the water-filled ditches that have to be crossed and the lack of shelter from the wind, no matter what direction it’s from. The weather on Sunday was fairly good for a January day at this venue, but despite the blue skies it was still very cold and very wet underfoot. 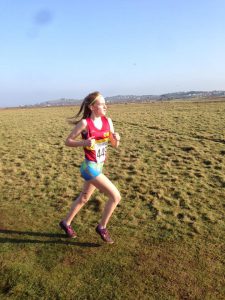 Issy Edworthy was the first to run for the Okehampton in the under 15 girls race where she ran well and didn’t seem too troubled by the going or the ditches. The Senior Ladies Team were next with five runners facing a 5.6k run around an increasingly muddy track. Molly Marvin was, as usual, the first lady home with a great run coming home just one place ahead of her mum, Sarah who is second in her age category overall. Gill Spinney was next, despite having a close inspection of the bottom of one of the ditches and then trying to remove the mud from her eyes and mouth right to the finish! Jane Jackson was next, finishing just three places ahead of Anne Binns.
The Ladies Vets are now 6th overall. 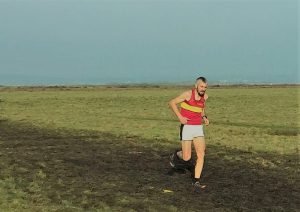 The mens team were again missing a few good runners due to injuries, but those who made it ran very well despite the track now resembling a bog in places. First home for the club was the on form Paul Crease, who stormed round with an incredible run at an average pace of 5.57 minute miles, securing valuable points for the club, and he is first overall in his age category. Next was Andy Vallance who looked strong all the way round and was followed by Rob Hicks, whose love of running on the moors meant he was quite at home with the boggy ground but not the lack of hills. Rob Kelly had been tracking Andy Vallance for most of the race and was slowly closing the gap when he pulled a calf muscle near the end, managing to jog the last bit back to make his score count. Paul Carter is second overall in the MV50 category, was next followed by Ed Dumpleton, Stuart Page and Andy Humberstone an amazing second overall in the MV40 category. 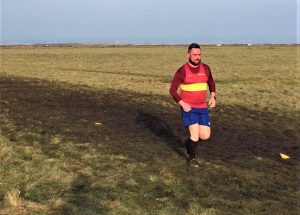 Roger Voaden got his 2018 marathon campaign off to a good start with a great run at the Gloucester Marathon. There was a new route this year, consisting of four loops with a leg out and back along rural roads, with a surprisingly flat profile for this part of the country. Roger completed in an excellent time of 3.07.00 and is looking forward to the challenge of running marathons on both days next weekend.

And finally, thanks so much to Mike Baker for a brilliant moor run on Sunday morning. The conditions couldn’t have been better for a January morning with some stunning views.
It was a great route to the summit of Yes Tor (from the Hub) and then back via Meldon Woods, a bit over 10 miles. 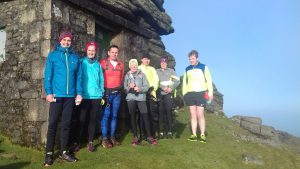