The inclement weather did not stop some adventurous ladies venturing out into the moor for what looks like a splash in the rain. Well done to all the moor runners this weekend. 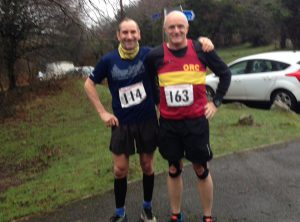 Two runners took on the Plym Trail Marathon series last weekend. Situated within an area of outstanding natural beauty within the Dartmoor National Park, the stunning views of the forests and valleys are breath-taking, taking the runners along the track of an historic railway along the Plym Valley. The course is an out and back one, repeated twice by the marathon runners and once by the half marathoners. Starting in Clearbrook a pretty Dartmoor village, the route takes the runners up the hill through the village in a loop and returns back to the start of the Plym Trail, which is then followed to the outskirts of Plymouth where they turn and head back to the start. With the races held on Saturday and Sunday, Roger Voaden ran a marathon on both days and Robert Richards on Sunday. Roger, a real marathon specialist, ran an outstanding day-one race, settling in second place for most of the race, catching and passing the leader in the last mile to come first in a great time of 3hr 17min. Roger was quoted as saying, “I have never won a race in my life…”. A good recovery ensured he arrived fit and well the next day to run other great race, this time holding second place again, only to be overtaken himself in the last mile to come third in a time of 3hr 26min. However his joint times gave him the overall first place, an amazing achievement and one that the club is very proud of. Robert, on the other hand, was using this marathon as training miles for his Ultra-Marathon in March, but the pressure of racing to deliver a good time got the better of him. After a strong first 20 miles, the steady climb back to Clearbrook proved to be very challenging, however he arrived home in a respectable 4hr 34min and was delighted with the outcome. 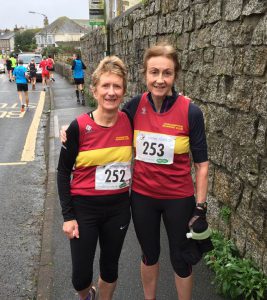 Further afield, Okehampton runners Jane Jackson and Mags Jarvis, made the long trip down the A30 to Camborne to take part in the Storm Force 10 race. This is the first race in the Cornish Grand Prix series and consequently has a very large entry from the Cornish clubs. The forecast had been for weather in keeping with the race’s name, but despite a blustery wind the rain held off with just a fine drizzle to cool the runners. The course is undulating along country roads, with a steep hill at mile four and a long pull at the end up the hill that is run down from the start. Mags ran a well paced race, and was pleased to run a PB over a quite testing course, finishing in 1hr 31mins. to achieve her target of a diamond club award. Still recovering from a bad cough, Jane did not enjoy her race and fell in the last mile, walking in with a marshal’s assistance to finish in 1hr 28mins, still achieving her diamond award however.