There was a return to summer on Sunday when the warm sunshine made the coast look at its best for those taking part in the Bude Pirate Run. 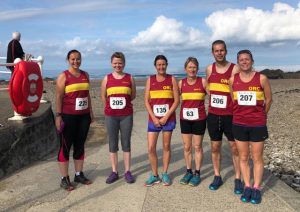 The tough 8 mile course starts near Crooklets Beach and heads uphill immediately onto the coast path. The short downhill to Northcote Mouth is followed by a long, steep set of steps up and soon after the course heads inland where, after a pleasant mile through Coombe Woods and a short stretch of road, the runners regain the coast path at Duckpool. Here they are faced with the steepest section of the course with two lung-bursting ascents, where all but the strongest runners are reduced to a walk. The stunning scenery of the coastline can be enjoyed on the return back to Bude with a short downhill on tarmac before a 50metre sprint on the flat to the finish line. Okehampton had six runners competing, all new to the race except Mags Jarvis who likes it enough to return for the third time. Jeremy Tandy was the first ORC home in a very fast and competitive race, coming 8th overall in 58.47 and  2nd in his age category.  Despite her hard race on Friday Jo Page still put in a good enough performance to be 3rd Lady in 1.07.51. Lu Walsh was the next ORC home, finishing strongly in 1.31.48, followed by Mags Jarvis in her first race since coming back from an injury in 1.33.56. Rachel Hayden has limited experience of off-road running and ran with club mate Katie Sherjan who who has never tackled a race of this distance, never mind the degree of difficulty the course poses, Rachael finishing in 1.58.12 and Katie in 1.59.03.

The Sourton Tors race marks the end of the Okehampton Running Club summer series each year, treating the Devon fell running community to a short and very sharp ascent of one of Dartmoor’s most recognisable tors. It’s probably the race that best epitomises the ORC summer series ethos – low-key, no-frills, friendly races in keeping with British fell racing traditions. You park in a farmers field, register in a pub car park and run (or maybe walk) up and down a big rocky, hill with limited if any route marking …oh, and the runners who come in at the back of the field get bigger cheers than the winner.

The 2.6 mile route starts from the Bearslake Inn car park, follows the stream up to the moor passing under the fine, stone built Lake Viaduct before heading up a fiendishly steep track to Sourton Tors. The extreme gradient of the climb gets it a grade ‘A’ rating from the Fell Runners Association classifications. From there the runners loop back around the other side of the valley and descend as quickly as their nerves allow down a good grassy track, with sheep droppings acting like ball bearings, back to the viaduct and home to the Inn.

With a field of 22 runners, the 2019 race remained one for the devotees. Winning the race with a clear lead was local Rhys Byrne, who had only moved back home to Devon last week, in 21:03. First lady home was the ever impressive Robin Carter in 26:52 who also won the FV50 category as part of the deal (a fact she made sure to inform male winner Rhys of!).

Thanks to the volunteer team who worked brilliantly and got some great photos out on the course. Tracey Mills, Rob Richards, Abby Williams, Karen Vallance, Mags Jarvis, Ed Dumpleton, Dave Best, Angus Farrelly and Jeremy Tandy – you were all brilliant!

Freedom Racing’s 2019 Summer Sessions race series concluded on the evening of Friday 6th September with the Porthtowan 10k – also known as “the beast”. ORCs Jo Page and Jeremy Tandy made the trip to Cornwall for the series finale and their fourth race in the five-race series. Having driven through heavy rain they were greeted by evening sunshine and a yet another stunning coastal location. Race registration was efficient as ever, allowing time for a quick look at the series standings. With 100 points still left on the table Jeremy, in third place overall, was 103 points adrift of the top spot making a series victory impossible. But Jo, in second place, was a mere 14 points down on the series leader. All to play for!

So to the race! Named “the Beast” for good reason – the route has almost 400m of elevation and winks cheekily at the “10k” label having a distance of over 11km! Hard from the word go, the runners set off from the sand at Porthtowan beach and straight onto a steep rocky incline which only got steeper and more technical as they approached the top. No time to catch breath before a steep decent to Chapel Porth beach and resumption of climbing – 180m up to the top of St Agnes Beacon. Coastal path became tarmac and then to trail as runners wound their way up the climb. Lungs heaving at the top, the quick blast down the Beacon was very welcome. Another short road section brought runners back to the coastal path once again. The view was stunning in the light of the setting sun: surf crashing against the shore below, purple heather and yellow gorse blanketing the cliff tops. Runners picked their way at various speeds along the rocky path, once more enjoying the dip down to Chapel Porth and up the other side. A final super fast, super steep, super technical descent brought runners to the finish back on Porth Towan beach. Wow – it was breath taking (in more ways than one).

Jeremy finished in 7th place (49min 41sec) and Jo finished in 24th place (55min 45sec). With the overall race series in her mind, and no control over how the the series leader ran, she knew she had to put in her best effort, overhauling a 20-second deficit at the top of St Agnes Beacon to arrive at the finish as first-placed Lady and securing a maximum 100 points. But would that be enough? Jo had to wait … Once the last runners finished twilight had arrived and it was finally time for the prize-giving ceremony. With her first place trophy already in hand, Jo’s name was announced again – this time as the series victor and Freedom Racing’s Queen of Summer 2019! 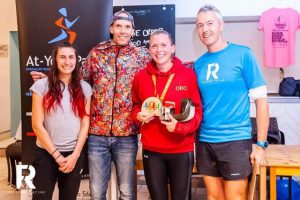 Summer Sessions 2019 has been brilliant fun. A return is definitely on the list for 2020!