Last Tuesday saw the sixth and final race of the Exe 5K Summer Series where eight ORCs took part. The evening was warm but there was a fairly strong headwind along the canal making section of the course a bit more challenging. Team ORC were in good form with Jeremy Tandy first home and 2nd in the M45 category, running a PB of 17.54, gaining his first Platinum award. Stephen Sincock ran a seasons PB of 18:50 placing 2nd in the M55 category and setting a new club record for his age category. Jo Page finished 1st senior lady in a diamond award time of 19:58 and Claudine Benstead finished in 20:08 to be placed second in the F55 category. Paul Evison also ran a new PB of 22:23 to set a new club record for the MV65 age category. Jo Bradford ran a seasons PB of 23:07while Jackie Dawes ran a PB of 24:07 winning the F50 category. Jane Richardson finished in 27:15 winning the F70 category. The calculations were then all done to work out the final series standings, where the best 4 race results are counted, with runners competing in the age category they start the season in. Three ORCs made the podium for the series with Claudine Benstead winning the F55 category, even though she ran all but the first race after her 60th birthday, her final score meant she was ahead of the second place finisher by a comfortable 5 minutes. Jo Bradford finished 3rd in the series in the very closely fought F45 category that went down to the final race, where Jo’s time saw her hold on to third place by a narrow margin of 8 seconds. Paul Evison finished third in the M65 category also with a comfortable 5 minutes over the 4th place competitor in the series. All in all a good showing by Team ORC in a series that is highly competitive and very well attended by the local running clubs. 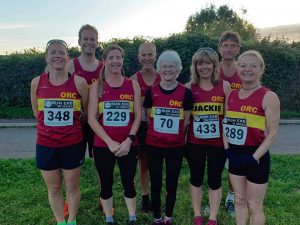 Having run a 5k time close to her PB last Tuesday at the Run Exe Series, Jane Richardson was thrilled to run a new PB at Exeter Riverside parkrun on Saturday where she broke into the 26 minute zone, with a new platinum PB of 26.48. When she started parkrun 5 years ago her goal had been to one day, run it under 30 mins and with the support of the members of ORC she continues to improve and inspire at the age of 70.

With blue skies and sunshine, the weekend’s races were enjoyable if a bit warm. Saturday saw the re-scheduled Trail Events Dartmoor selection of races where there were four distance options from a 31mile Ultra to a 12k event. 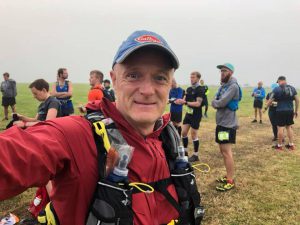 These had been postponed from February when snow made access to the start even impossible and the contrast with the summer-like temperatures of Saturday couldn’t have been greater. The day started with a chilly mist but the mist slowly burned off through the morning and by the mid afternoon the sun was high in the sky exposing the beauty of the Dartmoor surroundings. The route started at Holwell Farm a couple of miles from Widecombe in the Moor and took the runners anti-clockwise towards the Bovey river then through Lustleigh woods before turning west towards Manaton. The route continued in an anti-clockwise loop taking in Hayne Down, Heathercombe woods, Challacombe and on to the finish via Widecombe. Robert Richards was the only ORC representative in the ultra marathon distance. Having had problems with nausea in recent races Rob had changed his nutrition strategy and did thankfully feel better in this one, completing in a good time of 8hrs 20. 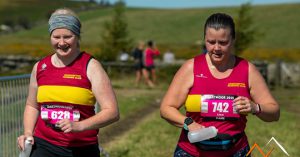 Claire Sprague and Jessica Corcoran tackled the 12k course and though they found the heat and hills tough they enjoyed their race, despite a detour when spectators covered a direction marker, finishing together in 2hrs 8min.

There was also a selection of distances and combinations at the Flying Fox organised series of races on Saturday afternoon and evening. These set out from Bicton College and took the runners over the heathland of Woodbury Common with the late afternoon 5k or 10k What Came Before and the 5 mile or 9.25 Nightjar races being held when darkness had fallen. Runners could do just one race or any combination of the two races they wished. Three ORCs, Angus Farrelly Jane Jackson and Derek Jackson, took on two races with all three opting for the 5k, where unfortunately the route twice passed alongside a hornet’s nest that had been disturbed making the hornets angry and ready to attack anyone. Runners were advised to sprint past but this did not prevent a large proportion of them, including Derek, from getting stung, some several times. Angus was the first back in 27.35 while Jane and Derek, both having their first runs in a while due to injury, were happy to just have a steady run round to finish in 33.23. 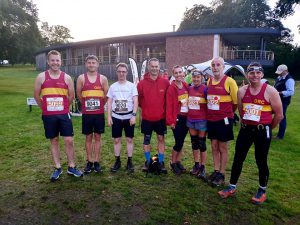 While the clear skies and sunshine made the afternoon races very hot, the clear evening with a glorious orange moon rising over the sea made for a beautiful night run where six ORCs ran the 5 miler while Angus and Hayden Bond ran the longer distance. Hayden had won the 5miler here last year and had another excellent race this time, against some fast opposition, coming home in 1.04.04 to take third place overall. Angus was happy with his finish time of 1.33.27. In the 5 miler Tom Andrews was the first home for the club in 40.55 with Phil Read close behind. Jo and Phil Turner had been struggling to get training in too and ran most of the race in the company of Jane and Derek, with a fast finish just bringing them in ahead in 54.15 with Jane and Derek in 54.19.

The Simply Health Great Bristol Half Marathon was the choice on Sunday 15th September for just two ORC club members who were amongst more than 12,000 runners. 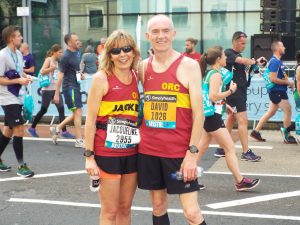 Dave Bates, a new club member, and Jackie Dawes ran the 13.1 miler, which starts alongside Millennium Square in the centre of the city from Hotwells through the Avon Gorge and under the Clifton Suspension Bridge and back for 6-7 miles and then takes you around the winding roads, parks, harbourside and attractions of the city centre for the second half finishing back where it starts. The runners start in waves and Dave set off at 9.31am in the first wave for the fastest of club runners, Jackie followed at 9.41am in the second wave of four. With temperatures forecast of 20+ degrees and a gentle breeze, the conditions were a little warm and the race organisers decided to cancel the Strava fastest last mile competition, warning the runners to be wary of the heat and look after their health. 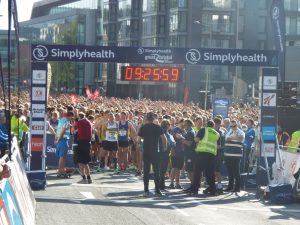 Despite the heat Dave put in an excellent performance to finish in a time of 1 hour 37 minutes and 20 seconds going straight in with his first platinum award for the club. Despite this he said he slowed down with the heat at the back end of the race. Jackie ran a PB pace for the first 10 miles, but then slowed with the heat for the last 3 and was pleased to achieve a gold award with a time of 1 hour 53 minutes and 29 seconds.