The iconic Severn Bridge was the destination for three Okehampton Running Club members to tackle the Half Marathon on Sunday 25th. The event, first held in 2014, is a challenging undulating course with one steep hill at mile 7 and the very hot temperatures that day made for demanding race conditions. In a unique experience for the runners, the old Severn Bridge and part of the M48 was closed for the morning to allow the racers to use it traffic free. The participants walked out on to the bridge to start on the western carriageway, over the point between the River Wye and the River Severn. Amid much fanfare, with hot air balloons and helicopter fly pasts, the race got underway at 9am. Running east over the bridge towards England in a welcome gentle breeze, the runners soon reached land, where they then ran along the M48 motorway for a while before leaving via a slip road and heading into the countryside, taking in lanes, hamlets and villages along the way. The race was very well supported, with steel bands, bag pipers, town bands, and kindly residents in the villages who sprayed the runners with garden hosepipes to cool them down. Runners finally glimpsed the white masts of the bridge and began to make their way back with relief over the bridge to the finish line in Chepstow on the South Wales side. Although this was definitely not a PB course, the ORCs all gave a good account of themselves all finishing in the top 25% of runners. Hayden Bond finished in 25th place out of 1335 finishers, in a time of 1.26.17. Graham Bryant was next ORC home to finish in a time of 1.39.53 and Jo Bradford finished strongly in 1.51.44, placing 5th in her age category. 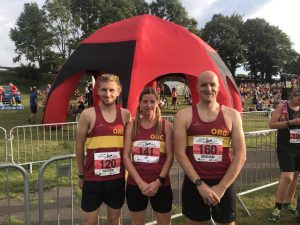 Not far away in Bristol the King family of ORCs were taking part in the Portishead Festival of Running, raising money for the 401 Foundation. With mum Karen still sidelined with an ankle injury it was down to the two junior members of the family, Harrison and Ollie, to fly the flag for ORC there. Harrison ran the 5k finishing in a fast time of 22.26 to come home first Junior Male and 10th overall, while his younger brother came 5th in the 500m sprint and also ran well against much older boys in the Mile Challenge. 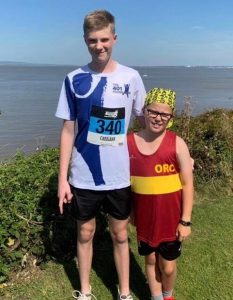 The scorching temperatures were still surprisingly in place for the Bank Holiday Monday when the Peter Tavy Plod took place. This lovely 4.5 mile race is run over moorland tracks and woodland trails with some stunning panoramic views and is always held on the Bank Holiday in conjunction with the traditional village fair. 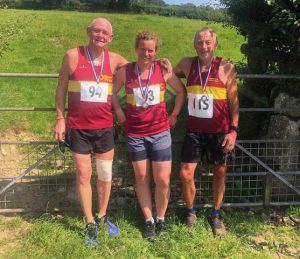 Three ORCs ran here, Merv Rice, Ian Page and Karen Gear and on a hot day the 1.00pm start made for an uncomfortably hot run with the first two miles entirely uphill. Merv was first home for the club in a time of 40.04, followed by Ian in 42.30 and Karen in 43.50.

By this weekend the heat was a thing of the past and there was a return to the more autumnal feel with showers and a cool wind for those taking part in Freedom Racing’s Dartmoor Highground races on Saturday. There are three distance options here with an Ultra Marathon, a Marathon and a 10 mile “sprint” up to the top of Yes Tor and back for the Yes Tor Race. This year Okehampton’s interest was focused solely on the marathon distance with two seasoned, long distance off-road runners and two competing in their very first marathon of any sort. Starting at the OCRA Pavillion in Simmons Park, the route follows the River Okement out to Chapel Ford and onto the moors, taking in many high points along the way including High Willhayes and Yes Tor. With some climbs being followed by open hillside and sheep track descents, this has a more wild, fell running feel than many trail races, although the route is well marked and has four well stocked checkpoints. First ORC home was club Chairman Jeremy Tandy with a great run at an excellent pace, finishing 6th overall in 4.07.42. He was followed by Robert Richards, pleased to have finished feeling well, unlike some of his recent runs in a time of 5.55.36. Hot on his heels was marathon rookie Katherine Murray, very happy to have completed in under 6hours, her excellent run bringing her home in 5.58.19. Angus Farrely has completed this distance and more in walking events, but this was his first running marathon and he was happy to finish in 6.14.12. 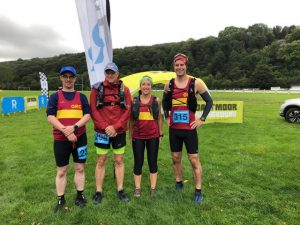 Sunday saw two Okehampton runners take part in Launceston Road Runners Treggy 7. Launceston Town Square is the starting point of this 7 mile circular race. The first mile heads mostly down hill out of the town and onto undulating rural roads until the first water station at the 2.5 mile point it’s then a half mile climb to the village of Tregadillett after leaving the village at 4 miles the last 3 miles are mainly downhill with the second water station at 5.5miles and a finish line in the grounds of Launceston Castle. Andrew Vernon was the first home having a good run to finish in 30th place overall and 2nd Vet 50 in a time of 47.07. Jane Richardson is really running well and put in another excellent performance here to be placed 1st FV 70 in a time of 1.11.53.

5 ORCs went to Bridgwater for their event combined half marathon, 10k and 5k. Rob, Andy and Paul set off in the half marathon around country lanes on a mostly flat course with a few gentle undulations. Warm and breezy conditions made for hard work at various parts of the course but respectable times were achieved by all with Rob in 1:20 (platinum), Andy in 1:23 (diamond) and Paul 1:26 (platinum) (official times not yet available). 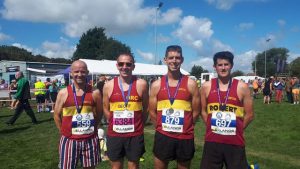 Starting shortly afterwards, Claudine Benstead and Geoff went in the 10k. Geoff defied the conditions continuing his great form and stormed home in a PB of 36:36. Claudine had to leave immediately after the race but was believed to have come home in an impressive time at around 40 mins.