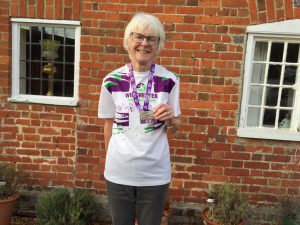 Jane Richardson ran in the very wet, hilly, Winchester half marathon this morning and was happy with finishing in 2.19 hrs. 1st in Vet 70 age category. With great support and marshalling in difficult weather conditions, it’s hilly, 3 miles up, 3 down, 3 up and 4 down. 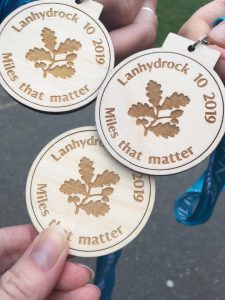 Apparently, it’s a race that has quite a mixture of ups, downs, woodland trails, mud and road. 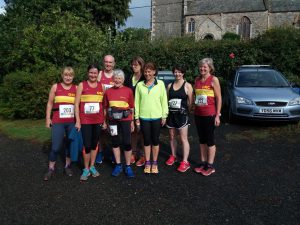 Four Okehampton runners and their support crews had a weekend away in Scotland to take part in the Skyline Scotland Running Festival. This is a set of four skyrunning races and three trail races taking place on consecutive days in the mountains around Kinlochleven. Three ORCs, Gill and Phil Spinney and Christine Fritsch, took on the extremely tough Ring of Steall Skyrace with over 8,000 ft of ascent along the 18mile course, while Jane Jackson, with an upcoming ultra, just ran the 5k Grey Mares Tail race. With very untypical clear skies and warm sunshine the runners had spectacular views of the Mamores range of mountains making the huge effort of this race worthwhile. The course starts at near sea level in Kinlochleven and immediately climbs to nearly 3,500ft, including some scrambling on the way. 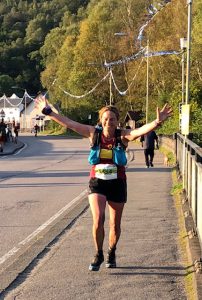 There is then a relentless steep downhill to be followed by another massive climb to nearly the same elevation with a ridge section of more ascents, culminating in a climb to the second highest point on the course. From there it is downhill all the way, but with the hugely technical terrain this doesn’t make for easy running either. Gill had run this race last year and with a bit more training in her legs she knocked 5 mins off her previous time to finish in 7.58.47. Christine found the ascents tough but was happy to complete in 8.44.15
being announced across the line as the first Austrian lady! 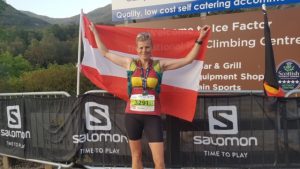 Unfortunately Phil aggravated an old injury in the week before the race but, determined to try, he completed over half the course, clearing the only cut off checkpoint sadly being forced to retire on the second ascent which meant a 2 hour walk retracing his steps to be taken by vehicle to the finish.
Jane Jackson ran in one of the trail races the same day. 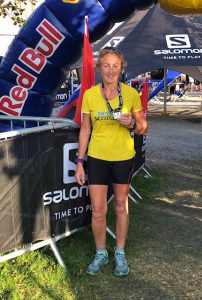 The organisers had stressed this was not a parkrun or an easy route and is possibly the toughest 5k in the UK. The Grey Mare’s Tail refers to the waterfall that the route takes the runners up past on the way out, where the steepness of the path and mix of technical terrain and bog made for a slow first mile. The second mile is less steep but still uphill followed by a a descent once more over ground that took a great deal of concentration. Jane was a bit daunted by the 90mins cut off, but enjoyed her race to come home in a respectable 49.21. 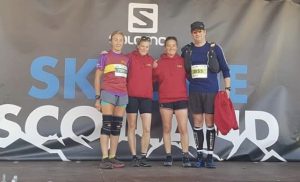