Another awesome weekend of running and not forgetting a mention of our very own Santa’s little helpers!

Saturday evening saw the third race in the Wildnight Run race series. This included a punishing 10 mile slog or a more sedate 10km around the reservoir.

A tough 10mile off road Burrator Noir takes in stunning terrain over open moor-land, including a punishing 5 mile continuous uphill ascent. The compensation for this climb was views to the lights in Plymouth while enjoying the peaceful nights atmosphere of the open moors. An exhilarating descent from Gutter Tor to Meavy Splash where runners had the option of getting wet legs or taking a longer route to avoid the river crossing, finishing with another harsh climb in the last mile. Although having never done the Bur-rator Noir before, Okehampton Running Club’s Christine Fritsch is an experienced night runner, finishing in 1.57.09, coming third FV40. 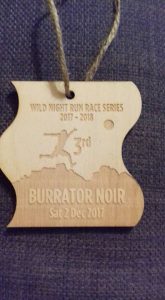 The Burrator 10k is an ideal first step into night running, and is a fast, flat road race, where a route of one and two-thirds laps of the reservoir, finishing at the visitor centre. A new Okehampton member, Tom Andrew, took on this as not only his first night race but his first 10k race too. A relative newcomer to running, Tom had previously only completed a half marathon and a 10 miler and this was his first race since joining Okehampton. He is reaping the benefits of training with the club, already having improved enough to have moved up a group, and was pleased to come 8th in his age category here, finishing in 54.08.

At Sunday’s Westward League fixture in Exeter which hosted the Devon X-Country Championships, there was another impressive turnout of ORCs despite some not making it through injury. Okehampton now has a good strength and depth of competitive runners ready to take on the challenge of these tough, fast races and there were some good performances over a very muddy and energy-sapping course. In the Ladies race, which again was an extended distance due to a marshalling error, Sarah Marvin was the first ORC runner home with a great run to come 4th in her age group for the Championships. She was closely followed by her daughter Molly, who despite lacking training this year, ran a brilliant race to come eighth and go forward to represent Devon at County level. Gill Spinney was next home followed by Jane Jackson, beginning to come back to form after several injuries, with Anne Binns next and Mags Jarvis having a great run at a faster pace than last year despite the worse conditions underfoot to come 3rd in the FV60 category. Issy Edworthy was the only representative for the club in the under 15 girls race where she held her own among some extremely talented opposition to come 9th, making her first reserve to represent Devon at Inter-County level. 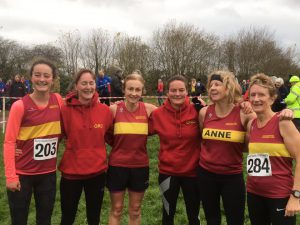 Eleven ORC men tackled the longer course which by now had become even worse underfoot, with on-form Paul Crease coming home first for the club with a brilliant run which gave him third place in the MV45 category. Andy Vallance was next, followed by Rob Kelly making them sixth and seventh in their age groups. Chris Turner and Hugh Robinson were next home, these five making up the team results for the League, while Paul Carter ran well to maintain a good placing in the League’s MV50 category, but not entering the Devon Championships. Graham Bryant finished next, followed by Ed Dumpleton having his debut X-country run here and enjoying what was a baptism of mud and hills, with George Haskell next and then new club member Stuart Page, also run-ning his first Westward League race, and Andy Humberstone. 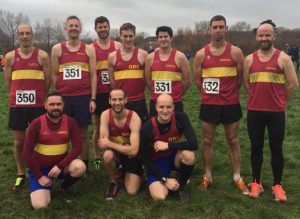 …and on a final note thank you to everyone who helped marshall the Santa’s park run on Sunday morning. A very well attended run with over 80 runners this years most of whom wore their very own Santa’s outfits.