Only a few brave runners out this weekend, and mighty cold it was!

Despite the wintery weather Ali Coulton, Robert Richards and Phil Spinney set out on a Race the Light event near Mothecombe in South Devon.

The Race itself is a shadowy 8.5 mile escapade, meandering through Flete Estates’ secret tracks and trails. The race starts on the sand, the runners were crossing the Erme estuary in the freezing waters as the light was fading getting wet feet and legs from the outset and up into the woods they ran. On the return leg, leaving the woods to cross the estuary for the second time, up the slipway and continuing to the finish line at the Old Schoolhouse.

The race had many challenges from racing against the light, the incoming tide, the slippery, sticky mud and off course the biting wind. 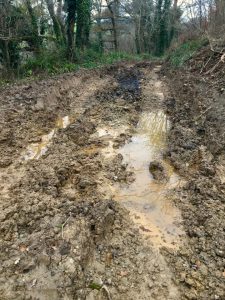 This year saw over 290 runners starting the race and the trio represented the club, proudly sporting their club colours. Robert Richards came in first with a time of 1hr 22mins, overall 66th position and 7th in the MV50 age category, second was Abi Coulton with a time of 1hr 33mins and Phil Spinney, despite starting out with a steady halfway pace he suffered a recurrence of a recent calf injury. Although this caused him to slow, his determination and awaiting family ensured he soldiered on to the end finishing in respectful 1hr 46min.

The cold winter snap didn’t put off two further runners from their continued preparation of an Ultra-Marathon in the spring, Jo-Anne Turner and Alison Holliday. Finding the highest and coldest part of Dartmoor setting out early to complete their training. Well done ladies! 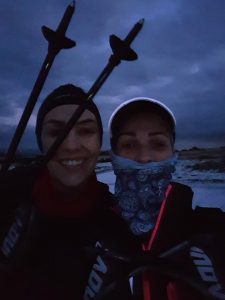