In a window of lovely weather on Sunday morning, 30 ORCs enjoyed near perfect conditions at the Bideford 10 miler, despite the course being flooded almost knee deep in one section. There were some great results too, although several were running with little training due to injuries, but determined to get their third in the series of stacking medals. Hayden Bond was the first home with a superb run in 1.00.19 and a new PB which would have been closer to the magic sub-hour time but for the slowing effect of the flooded 100 metres of track near Instow. Steve Sincock was second home, winning the MV55 category by a clear margin of 4mins in 1.03.43 to beat his own club record, followed by Andrew Vernon who was 2nd MV50 in 1.05.46. First ORC lady was Jo Page in 1.08.59 for 3rd Senior Lady and 5th overall lady, also a new PB and club record. Dave Bates was in the prizes again, coming 2nd MV65 for a new club record in 1.11.10 and Jane Richardson won the FV70 category in 1.40.30, setting a club FV70 for the first time, despite not feeling she’d had a very good race. 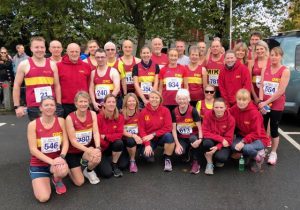 The heavy rain had caused flooding that forced a change of course at the Cornish Marathon where the notoriously hilly route had been changed to an out and back, though still with plenty of elevation. Two ORCs ran here with Robert Kelly finishing in 7th place in an impressive 3hr 6min, despite his pace slowing in the last six miles and Roger Voaden coming home in 3hr 29min. 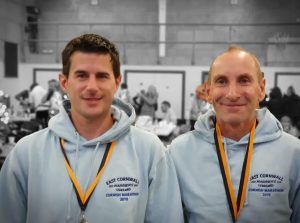 Cam Whitelaw took on an unusual 10k, running the Cornwall Air Ambulance Runway Runaround 10k at Newquay Airport with his dad. Here’s his report;
It was an early start for Newquay where the race was due to start at 8.00, however it was delayed for some reason and left us waiting in the cold and rain for 15 minutes. Finally we were off and we made our way to the runway turning into a slight headwind before doing the first U-turn to come back on ourselves. 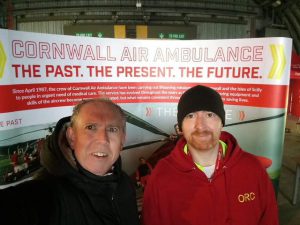 The light rain and tail wind was refreshing on the flat tarmac course going out and we got to run under the tails of a few parked up Thomas Cook planes which was an experience. At the second U-turn unfortunately we had the joy of the headwind and a slightly heavier rain. I felt good all the way around pushing myself at a good pace with my dad in unison. I managed to gather a bit more speed at the end and finished with a new PB of 56:24.

ORCs Jo Page and Jeremy Tandy headed in the direction of Torquay on All Hallows’ Eve for some spooky fun at Jolly Running’s Dark Halloween trail run. Featuring a trio of fun run, 5K and 10K, the routes twist and turn through the wooded grounds of Cockington Hall, seemingly finding the steepest slopes, the most slippery tree routes and plenty of mud. With the sun long since set the race winds along the trails and through the woods in pitch darkness. Head torches were mandatory, fancy dress optional. Zombies and ghouls and skeletons and witches mixed with runners in club vests and hi-viz lending the race a haunted carnival feel. 5K and 10K competitors set off together from the start, following the same route for about 3-miles in where the 5K headed to the finish and the 10K set out for another loop. The eerie sound of church bells echoed through the woods, with mist lighting up the beams of runners’ head torches. Reflective route markings and marshals guided the way to make sure that no souls were lost during the race. In the 5K Jo conquered her demons from last year when she got lost, finishing in a time of 27 minutes 54 seconds – fourth overall and first place female, securing another trophy for her collection! Jeremy, dressed in a skeleton suit, completed the 10K in 8th position with a time of 57 minutes 38 seconds. The best bit? Glow in the dark medals!

Kate Wilson was the lone ORC runner in the previous Sunday’s Plym Trail Autumn Half Marathon. This event was held on 2 days and she certainly picked the right day to do it – Sunday was cool, sunny and dry. The half marathon began with a short run from Clearbrook village hall to the top of the hill at the edge of the village and then follows a 12.3 mile out-and-back course along cycle route 27. 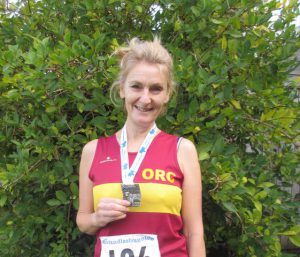 The attractive route follows an old railway line, crossing several bridges and passes through a dimly lit tunnel. It’s almost completely flat, although there is a slight descent in the first half mile – making a fun end to a half marathon! Kate was really pleased with her time – a new PB of 1.54.25. to be 3rd lady home.