Five Okehampton runners braved appalling conditions on when they took on races in the Trail Events Exmoor Challenge on Saturday. Even getting there needed some determination with flood waters and trees 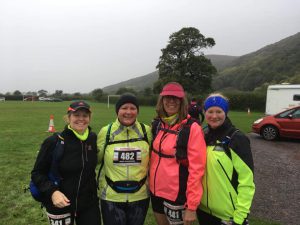 down across roads. Conditions were no better out on the course where storm force winds and rain made keeping upright on the muddy, slippery and often flooded paths difficult and made forward motion impossible on some of the more exposed areas. Carole Cornwall, Katy Speak, Jessica Corcoran and Claire Sprague had entered the half marathon hoping for a run with some lovely views of the moors and coast, but the reality on the day was limited views and an extremely tough and steeply hilly course. Kay and Carole ran together and completed in 3.37.13. Claire Sprague found the going really tough as she wasn’t feeling well and eventually retired at the second checkpoint.nt. Jessica had stayed with Claire until she retired but then continued on to finish on her own. Jane Jackson, in a change from her usual long distance runs, ran the 12k course, still with a big elevation for the distance. She was pleased to finish in one piece after being blown off her feet on a rocky section of exposed headland coming home in 1.46.28. 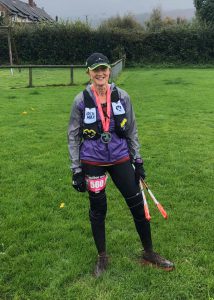 What a difference a day made when runners at the Tavy 7 on Sunday enjoyed near perfect conditions of sunshine and a gentle breeze. There was a great show of ORCs at this event as usual where there was a record entry of 700 runners to enjoy the undulating course round the Dartmoor lanes. First home for the club was Hayden Bond in 43.41 and first ORC lady was Emma Dean who finished in 57.03. It was the more senior ORCs who shone here though with Steve Sincock winning the MV55 age category in 44.36 to set a new club age category record by over 6mins, while Dave Bates was victorious in the MV65 with a great time of 49.10, knocking over 8mins off the current club age category record. Andy Vernon came 2nd in the MV50 category and a personal course PB in 45.47 and Paul Evison, still improving at 66, knocked three and a half minutes of last year’s time to take 3rd in the MV65 group in 54.45.
Other ORC times; Richard Davies; 44.38, Mike Baker; 52.25, Merv Rice; 56.16, Jackie Dawes; 58.32, Ged Fitzgibbon; 59.46, Ellodie Stott; 1.06.19, Lotte Smith; 1.09.15, Christine Fritsch; 1.10.37, Janet White; 1.17.57.

Jo Page and Jeremy Tandy took Okehampton Running Club on tour this weekend. A quick stop on Saturday for a picturesque Parkrun in Divonne-les-Bains, France. Followed by the main event of the weekend on Sunday in Lausanne, Switzerland: the Lausanne Marathon. Not just a marathon – but also a 1/2 marathon, 10K, 10K walk and 10K nordic walk. Set on the shores of Lake Geneva this festival of running had stunning scenery, a really friendly atmosphere and superb organisation. Oh – and the weather was glorious too! Jeremy had originally signed up for the marathon, but following injury swapped to join Jo on the 10K. Jo was first ORC home in a time of 40min 49sec (a massive personal best by 43 seconds!) and 31st female to cross the line. Jeremy followed home in a time of 43min 17sec in 544th overall. 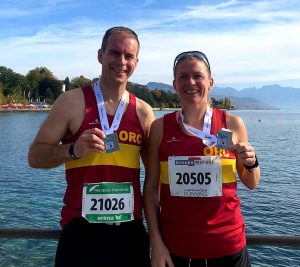