The Newquay edition of the Westward League Cross Country series took place on Sunday 10th November, combined with the Cornish County Championships. Set in the grounds of Newquay Sports Centre, the course heads out around the sports fields, packing in as much elevation change possible on the site. From juniors to seniors, ladies to men, their routes followed different loops and lap counts around the sports pitches to make up the distance for each category. The heavy rains from previous days had given way to clear skies on Sunday. Sunshine warmed competitor’s backs, and the grass of the sports pitches shone green. But the ground was still saturated and green grass soon gave way to brown mud making the going underfoot very soft and very slippery in the corners. From the start to the finish, each XC race was relentless, trying to catch the person in front, trying not to be caught – especially in sprints to the finish because times don’t count, only your finishing position. No medals for this race – take homes were smiles, tired legs and all the mud caked onto shoes, legs, clothes and even faces!

Well done to all who took part especially the newcomers, juniors Arthur and Stanley Hicks and seniors Richard Davies and Joe Lane. 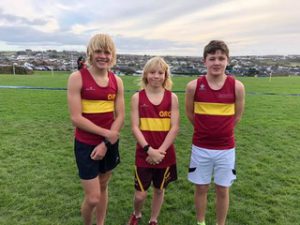 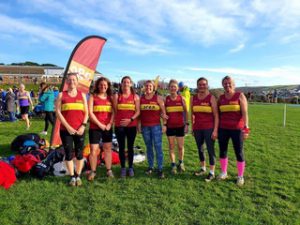 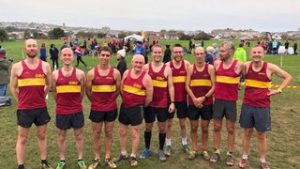 Junior runners Sam Priday, Mathew Richards, Quincy Richards and Harrison King ran for their school at the East Devon X-Country Schools event. Sam and Mathew both came first in their age groups, making it likely that they will be picked to represent East Devon in the County Schools Championship, while Quincy came 24th and Harrison 18th.