A dull, damp Saturday evening did not deter eight runners from tackling a very testing Wild Night Run, the penultimate race in the Night Run series. This is the Blue Ribband event in the series, with two distances to choose from, a long 10 miles (effectively 11 miles) or a shorter five mile option. With the first half of the race being uphill and conditions underfoot varying from standard mud to deep bog, it would be a tough course in daylight but has the extra challenge of being run in the dark. Starting in South Brent the runners head north to run a clockwise loop with the 5 milers splitting from the longer race just after two miles. In the long race Paul Crease was the first of four runners home, demonstrating that he can be just as quick over this sort of the terrain in the dark as by day. His finishing time of 1.24 secured him 6th place overall and first in his MV40 age category, a superb result for his debut night race. Christine Fritsch was the first of the three ladies to finish, putting in other great run to come home in 2.12. Having completed the five races required to count for the final standings in the series, Christine has finished in third place in her age category. Jo Turner and Ali Holliday ran the race together and, after a three week break from running, Ali was pleased to complete this tough race, finishing alongside her running buddy in 2.46. 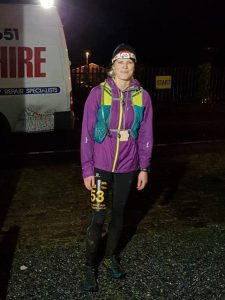 In the five mile race there was more success for the runners. Gill Spinney, who has done a few of these night races, had a great run coming home in 51.59 for an excellent third lady place. The two men running the shorter routes were both new to these night races, but Mike Westland was clearly not fazed by the dark or the conditions and ran well to come home in 54.19 to be first MV60. Not far behind him was new member Jo Page who crossed the line in 54.56, followed by Jo’s husband, Phil Turner, who had a good first night race, finishing in 59.46.