In between overnight rain and the incoming Storm Ciara, Saturday provided the perfect running conditions for the Exeter Half Marathon, cool, sunny and not a breath of wind. Starting from Haven Banks in Exeter, the route followed tarmac paths alongside the River Exe down toward Countess Wear, then out for a loop around Matford Business Park before heading back through the Riverside Valley Park past the Double Locks. This 2 lap, mostly flat, and largely traffic free course was made for speed. It was a great day out for team ORC with 8 runners, 5 of whom recorded new PBs.
Hayden Bond was first ORC home in an incredible time of 1.17.54, for a massive PB and 8th place overall. Following him in were Andy Vallance in 1.19.52 (11th) and Paul Crease in 1.21.18, (14th and second in age category, PB). Right on Paul’s heels was Robert Kelly, 1.21.23, (15th) followed by Jonathan Stephens 1.23.06, (21st & PB) and Jeremy Tandy 1.23.45, (23rd & PB). Jo Page also produced a PB to finish in 1.30.47, (67th and 3rd Senior Female), with Peter Dixon achieving a great time of 1.34.03 for 86th place in his first half marathon.
Sunday’s edition of the Exeter Half Marathon was postponed due to the storm. 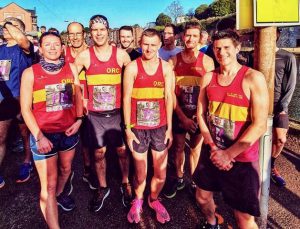