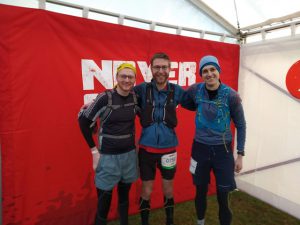 blue skies and sunshine for the three Okehampton runners taking part in Endurancelife’s South Devon Coastal Series of races. Chris Turner and Martin Trerise took on the Marathon distance while Jane Jackson ran the 10k as a training run. Starting from the village of Beesands all the routes initially headed south along the coast to Start Point where the 10k looped inland back to the finish, while the other distances continued east along the coast, turning inland at Lingbury Head. The Marathon stayed inland,

returning to the coast at Slapton where they followed the coast path back past Slapton Ley to the finish at Beesands. 40mph winds made the coastal sections particularly hard and there were plenty of tough hills to tackle too, but most problematic was the slippery, sticky mud underfoot which stuck heavily to the shoes making both downhill and uphill slow progress. Chris ran a great race coming home in 4.57.41 to be 15th overall, while Martin, only aiming to aim to complete the race, did so in 6.41.22. Jane had a good run finishing in 1.25.37 to be 1st FV60. 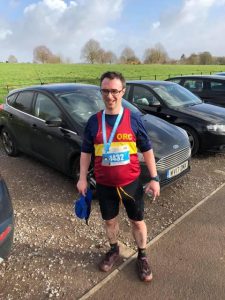 This was a two lap course with an uphill at the start of each lap, but with a long downhill to the finish. Angus had an enjoyable run, finishing in a very good time of 53.29.