While most runners attention was focused on the London Marathon last weekend, there were some other races going on with Club members out there competing in them. In Southampton there were three races, a full marathon, a half marathon and a 10k and Okehampton had a runners in both the marathon and the half. Yet again the weather affected the performance of the runners, but instead of rain or snow it was the heat that made for uncomfortable running conditions this time. Roger Voaden ran his 75th Marathon, a two lap course of the Half Marathon, finding it hot and tough going but still enjoying the run and finishing in 3.35.09, while in the half, Jo Page ran herself a PB, just a week after setting it at the Tavy 13, coming home in 1.47.53. 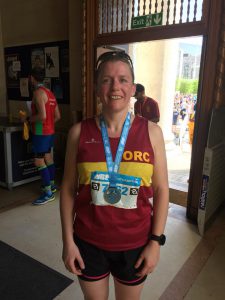 Much further away Mags Jarvis decided that as the Bodmin 5 Tors was cancelled this year she would try a challenge with much more climbing and greater distance not too far from her daughter’s home, called the Clwydian 10.  The Clwydian Hills are in NE Wales and the famous Offa’s Dyke runs along the ridge. The highest point is Moel Famau at 554m. The race was just a bit short of 10 miles with 3000 ft of climbing. Thankfully here the temperature was much less than in Southampton, at a comfortable 13°C and luckily they finished before some heavy showers. Mags ran with her daughter Sarah on the whole route, finding the race small, friendly and scenic. They finished in 2:21 with Mags being 15th out of the 39 ladies taking part and 1st W60.

Okehampton Running Club also had seven members running the London Marathon and there will be a report on how they all faired next week.