Seven Okehampton Running Club members took part in the 2018 London Marathon which went down in history as the hottest one ever. Having trained through months of cold and wet weather the runners were completely unprepared for running in temperatures of 24 degrees and strong sunshine so thoughts of PBs and best ever London runs had to be shelved. First home for the club was Paul Carter in an extremely impressive 3.06.00. Paul was in great shape, his training having gone very well and had been hoping for possibly a sub-3 hour finish, but he soon realised this wasn’t going to be achievable in that heat and slowed just a little to a more suitable pace. His run was made harder when at mile 22 he found he had lost his last gel, meaning he had to run the last few miles on empty. Having completed Barnstaple parkrun the week before London in 18.22, giving him 82.3% age graded percentage, the highest of the day, and the Taunton Half Marathon at the beginning of the month in 1.22.18 with an age graded percentage of 85.6%, Paul starts the new Awards year with three platinum awards already. Charlie Galley was next home, running in memory of his father for the David Shepherd Trust, a charity helping wildlife in Africa and named after the famous wildlife artist who was a personal friend of his father’s, also a very talented wildlife artist. Charlie felt slightly disappointed with the second half of his race where the heat made him slow to well below his normal pace but still finishing in a very respectable 3.37.45. 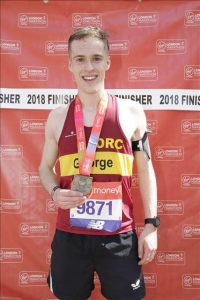 George Haskell was one of only two in the club to get his place through the general ballot and was running his first ever marathon. He ran a very well paced race, especially for a first-timer and was really pleased to finish in 3.44.58. Jackie Dawes was the first ORC lady home, having earned her place through a ballot within the club for the one place Okehampton is allocated based on its membership. She did herself and the club proud with a finish time of 4.21.07, just 1min 30secs slower than her previous run there, but if the conditions had been more favourable she would have undoubtedly set a new PB. Heidi Wills had been really lucky in getting through the official London ballot this year having run the marathon last year with the club ballot place. She took the opportunity to raise some money for the Force cancer charity, and was quite pleased to finish in 4.35.13 given the heat and the fact her training hadn’t gone as well this year. Both MaryCarol De Zutter and Kathryn Volkelt-Igoe had already got marathon places through their previous clubs, Reading Roadrunners and Devizes Running Club, before moving locally and joining Okehampton. MaryCarol had deferred this place last year having been unwell so had to take it up this year or lose it. She finished in 5.44.17 and is now looking forward to getting back to her preferred off-road running. For Kathryn this was her third marathon and she was pleased with her time of 5.48.15 given the heat, but promising that it will definitely be her last marathon.

With not many local races this weekend Okehampton Running Club members had to travel some distance to race and three ORCs went to separate venues, all of them running 10k races. George Haskell had taken a week’s holiday after his marathon debut in London and came back to run the Flitwick 10k with the intention of just taking it steady round the undulating course. However his legs had recovered much more quickly than he had anticipated and instead of a having a jog round he ran a great race to finish in 39.32, setting himself a new personal best and going under 40 minutes for the first time. 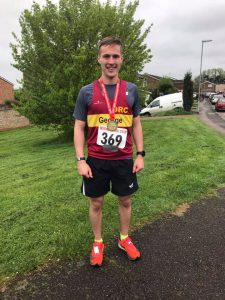 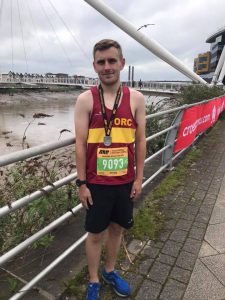 Hayden Bond made the journey to South Wales to take part in the inaugural Newport 10k, held on the same day as the established Newport Marathon. The route starts and finishes on Newport’s riverfront, with a flat and fast course passing some of Newport’s most iconic landmarks and the recently revamped city-centre. Having recently run his first half marathon Haydon chose this as his first 10k and set himself a very good time of 41.53 as his first PB. 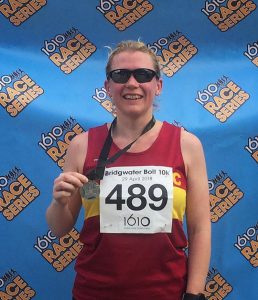 Jo Page has raced nearly every week since joining the club and seems to be getting quicker with each one, this week running the Bridgewater Bolt 10k. As you would expect in this part of the country the course is predominantly flat with a nice mix of urban and country scenery and just a couple of small hills to contend with. Jo yet again set herself a new PB, finishing in 47.04 to come third her age category.

…..and, not forgetting the wonderful Moor runners! 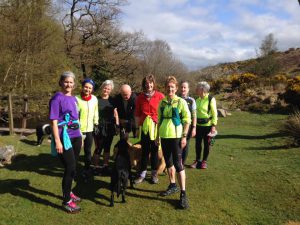