A fantastic variety of running this weekend. The season has got off to a great start. You are all such inspirational people of all ages and abilities, what a club we have!

The re-scheduled Tavy 13 Half Marathon, postponed due to the snow in March, took place on Sunday and saw a good turnout . A few who had been due to run on the first date couldn’t take part this time, but there were still 12 runners from the club to take on this hilly course. Unfortunately the weather still wasn’t great with some rain and breezy conditions, but this is not the easiest of courses so the runners were happy with the cooler conditions. The race starts and finishes on the athletics track at Tavistock college with a course that takes the runners out to Dartmoor and back and, although there are two tough hills at miles five and eight, the last three miles are mainly downhill. Roger Voaden, back to road racing after his ultra two weeks ago, was the first home for the club in 1.29.41 to come 14th overall and 2nd MV50. Just two places behind him, having had Roger in his sight for most of the race, was Hugh Robinson, pleased with his time of 1.30.39 as he is still coming back to fitness after an injury lay-off. Newcomer Hayden Bond had a good run round a tougher course than he’s tackled so far finishing in 1.39.41 with Mike Baker coming home in 1.45.12 and John Binns in 1.50.04. First ORC lady home was another newcomer, Jo Page who has thrown herself into the racing scene with enthusiasm since joining the club. She ran only her second ever half to score a huge PB finishing in 1.50.04 and having run a 10k race in the same week while working in London, where she clocked 45.08 for the Orchid London River Run. Cathy Carey and Jo Camies had a good run together finishing in 2.00.46, followed by Anne Binns well into her training for the Exeter Marathon in 2.03.15. Christine Fritsch and Charlie Collyer also ran together, both of them making a rare appearance at a road race, usually preferring off road running, and were pleased with their time of 2.05.19, this being a new PB for Christine. Phil Read has also had injury problems recently and was happy to complete in 2.05.39. 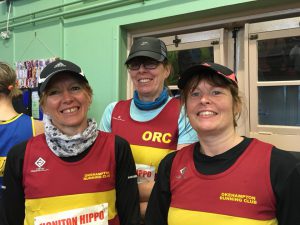 The wet weather didn’t make a huge difference to the runners at the Honiton Hippo where being wet and muddy is part of the enjoyment of the race. Three Okehampton runners took on this seven mile race that takes runners along undulating woodland paths and across some boggy fields, with two river crossings and ample mud. Carole Cornwall and Katy Speak had experienced this race before but in much drier conditions, enjoying the race more this time, while it was the first time Tracey Mills had run it. Carole and Tracey finished together in 1.40.52 with Katy just behind in 1.41.24. 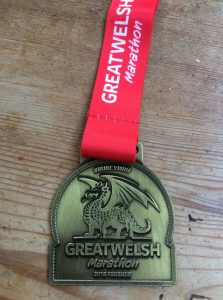 Further away there was a lone ORC, Deborah Cunningham, running the Great Welsh Marathon at Llanelli on Sunday. This race is a double out and back which is repeated twice on the Millennium Coastal Path which overlooks Llanelli Beach and the Gower Peninsular. This does however make the course very exposed to the elements, with no protection from the wind or rain which can turn a flat potential PB course into a tough one. Unfortunately these were the conditions experienced by the runners on Sunday but Deborah did well to complete in 4.53.40, raising over £800 for the Young Minds charity by doing so.