For such a short report it was in fact a long run, well done guys for yet another marathon feat. How do you all keep maintaining those times?

The last of the autumn marathons took place on Sunday with the challenging Cornish Marathon.
This is now Cornwall’s only all road marathon and has been organised by the East Cornwall Harriers for the last thirty years. Starting from Pensilva, the runners are taken on a scenic circular route out along the Draynes valley to Jamaica Inn at Bolventor and back along the Fowey valley. With over 2,000 feet of ascent and a steep climb from miles 24 to 25, this is a tough end to the marathon season. Four guys who took part and the first home for the club was Paul Carter, reversing his more accustomed position of a few minutes behind club mate Roger Voaden, to finish in 3.12.51 coming 10th overall and first MV50. Roger was the next home, finishing in 3.15.29 to be placed 12th and second MV50, both of them improving on last year’s times, with Paul knocking 13 minutes off his and setting himself a new PB for the course. Chris Turner also improved on his previous time by ten minutes, finishing with club mate Charlie Galley in 3.39.54.

At the Templar Wild Night run on Saturday evening it was Okehampton runner Gill Spinney’s turn to race this time, while her husband sat it out with their children. This is a brand new 10k route from Stover Country Park to Stover School on compact earth tracks through woods and fields as well as a section along the bank of the River Teign. After a warm up run with her daughter Kiera in the under eights 1k race, Gill had a good run round this relatively flat course to finish in an impressive 51.19, coming fourth in the FV40 age category.

Katie Littlejohns took a small group early on Saturday morning. They climbed over 1200′, including West Mill Tor and Rowtor. A special congratulations to Lucy Marrison who passed her 1000 miles of running this year while they were out. Robert Richards also went out to recce one of the legs of the Dartmoor 600 starting from the Dartmoor Inn over to Yes Tor and back. 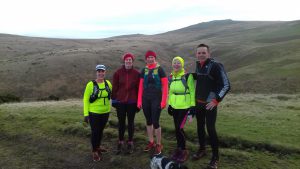 As always someone somewhere is taking advantage of the empty space and wonderful off-road opportunities right on our door step. Always moor runners going out during the weekend. Do keep an eye on the Facebook pages to see who is going. They will always welcome company so if you are interested just says so and someone will take you up.

If there are runners out there not getting a mention in the weekly run report then please ensure you post some details on facebook. We have not heard from any beginners yet so please encourage then to write a post.