Despite the Autumnal weather the runners keep coming out to represent our club. Yet another weekend of awesome running. Sunday saw another fantastic turnout of runners both at the Drogo 10 and the second round of the Westward League cross-country in Newquay, with one dedicated ORC actually taking part in both these events.

The Drogo 10, a hilly and often muddy trail race through the grounds and woods surrounding Castle Drogo, attracts many runners every year wanting to enjoy the beautiful autumn colours and the testing course, culminating in the steep climb up the notorious Hunters path. Following his win at the Templer Ten last week, the mud and hills were no problem for Okehampton’s Brennan Townshend and he finished in 1.00.04 to come second overall. Clearly in such a hurry Brennan had no time to stay for the presentation, he rushed off and drove down to Newquay to join the club’s Westward League team. Rob Hicks also had a good run to finish strongly in 1.08.45 to come tenth, followed by Geoff Hill in 1.14.18. Charlie Collyer was the first ORC lady, in 1.38.06, with Christine Fritsch next, running her best time round the course in 1.43.21 and Mags Jarvis in 1.47.48 to be 3rd FV60. 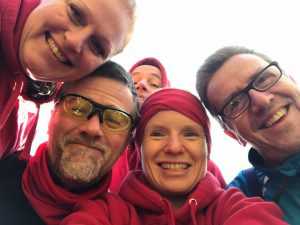 While the Drogo runners had the woods to shelter them from the strong and very cold northerly winds, the runners in Newquay had nothing to protect them on the exposed rugby pitches where the Westward League cross country was held. In parts of the course it was a struggle to run at all when being knocked backwards, but Okehampton’s male and female teams all battled through it. The Ladies race was first, with the talented Jennie Bruce coming in first for the club and very well placed within the race. Jennie, who has only taken up running in the last few months, felt she hadn’t paced it well, but as this was only her second race of any sort she is still learning racing technique. After Jennie, the finishing order for the ladies was Sarah Marvin, who is now 3rd in her age category, Molly Marvin, Gill Spinney, Anne Binns and Jane Jackson. 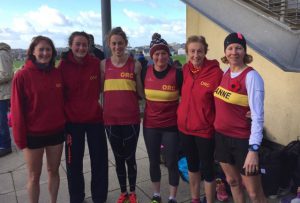 The Men’s team was slightly depleted this month with several runners not able to go, but those who did put in great performances. Brennan Townshend made the trip down there worthwhile by coming in an excellent 20th overall and first of the ORC men. He was followed by Paul Crease, Andy Vallance, Paul Carter, who is currently a magnificent 1st place for his age category, Hugh Robinson, Mervyn Rice and Andy Humberstone.

A round up of the team positions so far are; Men’s Vets are 5th and the Men’s senior team are positioned a respectful 6th place overall with 52 teams. This is particularly good considering the league is full of track athletes as well as top class club runners. The Ladies Vets team are 7th out of 47 and the Ladies seniors are also 12th out of 72 teams. Our running club is really holding its own in a very competitive league. Well done to everyone taking part.

The final mention in this weeks run report must go to Mags. She took part in a sponsored Great Escape half marathon in August on behalf of Parkinson’s UK and raised £3017.50. Mags said, “Thanks so very much to everyone for your amazing generosity. It has been brilliant for me to have such fantastic support. I can’t thank you all enough xx”. Well done Mags for completing the event and raising such a huge amount of money for such a worthy cause.