Last Saturday three Okehampton Running Club members made the long journey up to Loughborough to represent Devon in the Intercounties X-Country Championships. Thankfully the conditions were much better than last year when the entire course had been a mud bath, with sunshine and good going underfoot. Jo Page was running in the senior ladies team, while Sam Priday was in the Under 15 boys team, and for both these athletes it was their first race wearing the blue and white Devon vest, For Molly Marvin this was her second appearance at these Championships, this time running in the Under 20 Women category. All three produced good runs, Sam in particular, completing the 4K course in 14.25 to be first home for Devon and 74th overall. For Molly this category was a step up in distance from last year to 6k but she finished well in 30.13, the third Devon athlete home. Jo Page had been working abroad and only flew back the day before but still produced a good time round a 10k course, finishing 185th out of 266 runners in 46.45. 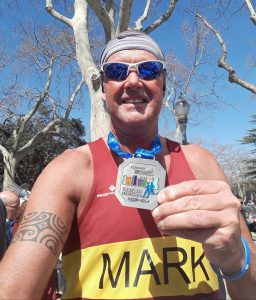 Sunday was meant to be Mark Hawkins’ last marathon when he took part in the Barcelona Marathon, his second time round this course. Mark had decided to run one last marathon before returning to the shorter distances he enjoys more, so had chosen Barcelona for his last where he had enjoyed a good run in 2017. However, after entering he had got a surprise entry for the London Marathon which he couldn’t turn down, so Barcelona will be his penultimate one. In very hot conditions and being short of some training miles, Mark was pleased to complete in a good time of 3.53.43, having also raised a large sum of money for the Devon Air Ambulance. 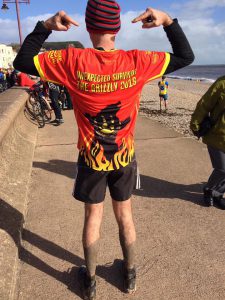 There was a lone Okehampton runner, Mike Baker, at this year’s iconic 20 mile Grizzly which had been cancelled last year due to the untimely “Beast from the East” snowfall. Having trained once for it but not been able to run, Mike finally got the chance to put his training to the test round this very tough course with its many steep climbs, mud, river crossings and pebble beach section. The weather was considerably better this year with a mainly sunny day, although there was a strong and bitter wind. Mike enjoyed both the great atmosphere of this race and tackling the course, finishing in 3.43.44.

Several Okehampton runners took part at the weekend in the Run 4 Rosie, a 24 hour sponsored run fundraising for the Roy Castle Lung Foundation in memory of Rosie Webber who lost her battle with lung cancer last year. Hosted by Chagford Runners, this was a relay style event where the aim was to have someone running around Chagford Parish for every hour between 9.00 am Saturday and 9.00 am Sunday. With 5k, 10k and 10 mile routes this wasn’t a race, just an event to raise some money for this very good cause. Deborah Cunningham, Hannah Ramsay and Kate Wilson all ran the 10 mile course on Saturday, while Jo Page had to return from the X-country Championships in Loughborough before she could complete the 5k course on Saturday evening.