After last week’s summer temperatures, this week it was back to the reality of wet and windy conditions more usual for this time of year. Unfortunately this change coincided with the Bideford Half Marathon, hosted by Bideford AAC and celebrating its 25th Anniversary this year. This hugely popular race is often used by those training for marathons as a marker of how their training is going and starts on Bideford Quay taking the runners inland by road to the Puffing Billy at Torrington, where it turns onto the Tarka Trail to return to Bideford. Okehampton Running Club had a good turnout of runners ready to take on this fast and flat course and they were led home by club Chairman, Jeremy Tandy. More accustomed to off road running and with only one previous road half marathon under his belt, his time of 1.25.37 gave him a twelve minute PB. Hot on his heels was Hayden Bond, also setting a new PB with a great run in 1.25.39, while Stephen Sincock stormed home in 1.26.43 to claim the 1st MV55 prize and set a new club age category record. Claudine Benstead, was the first ORC lady home in a superb time of 1.34.03, to win the FV55 category, also setting a new PB and new club record, while Jane Richardson continues to improve her times with a new PB of 2.16.33 , giving her 3rd place in the FV65 group. There were more personal bests and club records for the runners, with Jo Bradford clearly back on form to finish in 1.45.40, taking the club FV45 record and a PB of over two and a half minutes. Paul Evison knocked 10 minutes off his previous PB with his first sub-two hour finish in 1.50.00, setting a new club MV65 record, while the biggest improvement came from Tom Andrew, whose time of 1.45.33 was nearly a 15 minute PB. Karen Vallance’s PB was set at Bideford eight years ago, so she was pleased to improve on that with her time of 1.46.26. Catherine Walker was running her first ever half marathon and with a lack of training due to injury she was happy to complete in 2.20.02. 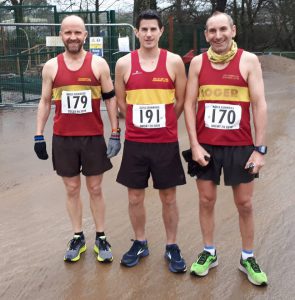 Further afield, there was a revival of another important race for this time of year, the Duchy 20. This race was always perfect for those training for a spring marathon to do a 20 mile run under race conditions, but for organisational reasons hadn’t been held for several years. The course remained the same with a downhill start from the Penventon Hotel in Redruth, taking the runners out towards Illogan then out to the coast road before returning inland to start the shorter second lap. Okehampton had three runners taking part, all training for the London Marathon and they all had good runs, with Rob Kelly first home of the trio in a terrific time of 2.14.07, coming 7th overall and 2nd M35. Training partners Paul Carter and Roger Voaden were the other two running here, Paul finishing in an excellent 2.19.09 to be 2nd MV50 and Roger in 2.22.06 for 3rd MV50. 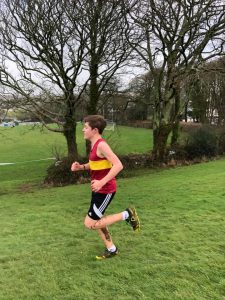 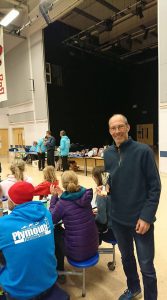 The final round of the Westward League X-country unfortunately clashed with the Bideford race, meaning a much depleted ORC team took on the Redruth fixture. Wet and windy conditions were experienced here too, with the men’s race in particular being held in gale force conditions as Storm Freya started to take a hold. Mathew Richards was the only junior to run, coming home in 10th position having improved with each of his races, but having only competed in three fixtures he was not placed in his category. Paul Crease had a good run despite the ferocious conditions finishing 11th which was a good enough position to see him come 2nd in his age category in the final placings. Christian Davies and Stuart Page also braved the weather to run here with Christian finishing with his highest placing of 37th and Stuart 52nd. In the final overall positions Okehampton had two runners placed, Paul Crease 2nd MV45 and Stephen Sincock who had already secured his 2nd MV55 place with the luxury of not having to travel down to defend it. Jane Jackson’s cough prevented her from taking part and consequently dropped from second to fourth FV60 and Sarah Marvin also finished in the same position in the FV45 category.