Nine members of Okehampton Running Club ran the Torbay Half Marathon on Sunday. When the day arrived the sea looked very tempting! The actual race course was a traffic free two lap route which started and finished on Paignton seafront, taking in the stunning coastal views across Torbay. The weather was very hot but still some excellent times were achieved on the undulating course. 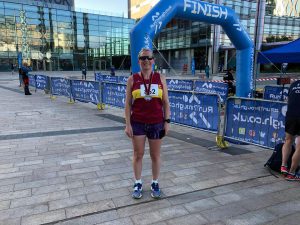 Okehampton Running Club lady, Jo Page continues to find out local races wherever she is working and this week she competed in the Run MediaCity 10k held near the Manchester area. The course is a multi lap race taking runners past the BBC and ITV television studios. This is a midweek race which Jo completed in a new PB of 44:24, and she was 2nd female over all.

Jo completed her week competing in Saturdays Exeter Inflatable race which is a fun packed race combining a variety of inflatable obstacles, no PB here but a whole bunch of fun. 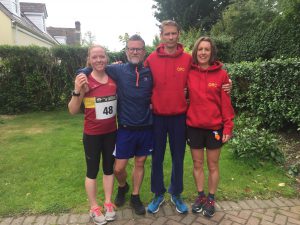 The 2018 Father’s Day Half Marathon in Guernsey saw 3 Okehampton Running Club members take on the Half Marathon. The race started towards south west corner of the island in the L’Eree area. The runners follow the main coastal road north before turning east across the top of the island then south to finish in the main town of St Peter Port with the finish on the Crown Pier in Town.

As in 2017, all competitors will be given a free half-litre of low-fat Guernsey milk when they cross the finishing line, as well as a medal and souvenir technical running vest or t-shirt. Jean-Paul Quertier came in first of the ORCs in 1:36:47 followed by Jason Ewing 1:40:50, Keri Quertier ran in with a new PB of 1:44:42 (PB by nearly 3 minutes). Keri was accompanied by former ORC Rebecca Ewing in an impressive 1:44:42.

Many thanks to Mags and Robert for preparing the report whilst Jane is on holiday.