The main event for runners this weekend was The Age UK Exeter 10K Retro Run which started and finished on the Exeter Quay. The run made its way through Riverside Valley Park, Double Locks pathway, Bridge Road, Mill Road and Mill Lane, Northbrook Golf Course and the beautiful woodland leading to Salmon Pool Lane Bridge, Duckes Marsh, Belle Isle Park and Exeter Quay. Seven ORCs ran this race some of whom wore retro shirts; Mike Baker (Didn’t wear a skirt) was first ORC home in 45:37, Emma Cunnington was 1:05:50, Jackie Dawes was first in her age category, a PB and her first time in under 50mins with a time of 49:26, Tracey Mills and Rachel Holland who are nursing recent injuries braved the race and came out unscathed with a great time of 1:01:19, Karen King achieve another strong time with 48:49 and Jane Richardson who came in first for her age category F65 in an amazing time of 1:01:52 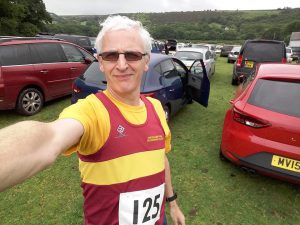 Andrew Vernon completed the Burrator Horseshoe Run. A 7 mile moorland run from Meavy and out over Dartmoor. The Burrator Horseshoe is a scenic, challenging moorland run, starting and finishing at Meavy Village Green. It is a part of the Meavy Oak Fair, a traditional village green fair held annually. Andrew finished in a very good (Unofficial) time of 48:30. 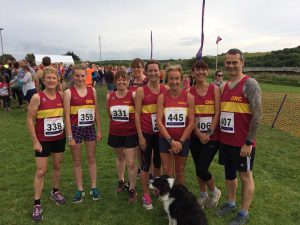 Last Wednesday evening saw the 10th Anniversary of the hugely popular Bude Lifeboat Run, and to mark the occasion each runner received a commemorative T shirt in addition to the usual finishers’ medal. The 6 mile course changed last year to avoid congestion in the early stages and is slightly shorter now but with an extra hill in it. we had a smaller turnout here than usual with several would-be runners missing out when entries filled up so quickly, but those who took part put up some great performances. First home for the club in a great time of 46.26 was young Issy Edworthy, now out of the junior races here and running her first race over 5k. Close behind was Karen Vallance running really well despite not having raced for some time and finishing in a very good 46.43 to come 2nd FV45. The next two runners’ home had both completed the tough Tsunami marathon four days before, but Jo Turner found good speed in her legs still to finish in 47.16 with Jane Jackson coming home in 50.25 to take 1st FV60, while Mags Jarvis was third in the same category with her time of 51.45. Fast improving Phil Turner was the only male representing ORC and did extremely well to knock 6 mins off his course PB, finishing in 52.31. Katy Speak and Carole Cornwall had both run the 16mile Tsunami and much appreciated the lack of huge hills and fewer miles here to finish in 58.15 and 58.18 respectively. 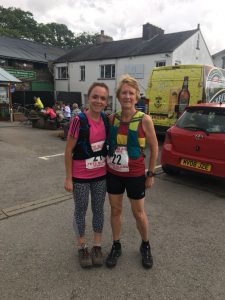 Mags Jarvis ran the Brunt Knott fell race in the Lake District, which was her third race in 9 days. A 5.6 mile with a 410m climb to the summit in a time of 1:12. The conditions were good for running being cloudy and mainly dry under foot. There were some excellent views of the Kentmere Valley and beyond. 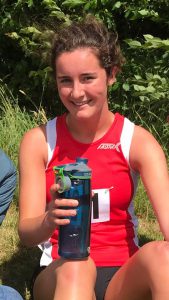 And finally, an exciting talent from the Club is Eleanor Marvin, one of our junior members, who was selected to run the 1500m for Devon at the South West School’s Track and Field Championships. She had a really good run against extremely fierce competition. Her time of 5:26 was just outside her pb but good for the very windy conditions.

Team effort this week in the production of this report, Jane Jackson, Mags Jarvis and Robert Richards.