Last Wednesday six Okehampton runners enjoyed an evening’s racing over the moors at Merivale when they took part in the Neolith Fell Race. Organised by Tavistock AC and Tamar Trail Runners, this race is only in its second year, but with the typical relaxed fell race atmosphere and lovely route it will doubtless increase in popularity. 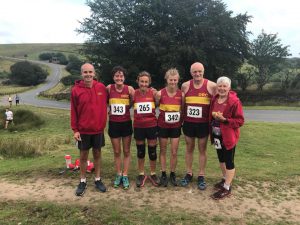 The course starts at the end of the Neolithic Stone Row across the road from the Dartmoor Inn and the runners follow the line of stones until the Four Winds car park where, after crossing a road, they take the track to the top of Great Mis Tor. After the boulder-strewn top of the tor is negotiated there is a steep but runnable descent to a stream crossing and then a climb up the other side. where a ridge path is taken to Roos Tor followed by a fast and furious descent to the finish behind the pub. First ORC home was Molly Marvin with a great run to win the under 23 age category in 46.09, with Mike Baker next in 49.20 and Robert Richards in 50.47.  Christine Fritsch had a good run, coming home in 53.56, followed by Jane Jackson in 62.37 and Janet White in 72.46.

The same evening a single ORC, Claire Sprague, took part in the Gecko Gathering 10k in Haldon Forest. Organised by Purple Gecko Events, there are 5k or 10k options here, the longer race being two laps of the shorter version and on a warm evening the hilly route made for a tough race. Claire ran the 10k route, finishing in 1.25.46.

ing Okehampton runner Hayden Bond took part in the Chulmleigh Fair Race, a route of only 2 miles but with a couple of nasty little hills in the course. As the race started Hayden, along with last years winner, took the lead early on and broke away from the other runners. By the first hill Hayden had the lead and never looked back, winning the race and equalling the course record in 12.29.

Sunday saw the Stoke Gabriel Carnival Run take place in glorious weather. This is a multi-terrain race across fields and bridleways with the occasional stretch on quiet country lanes, following the beautiful River Dart. Despite the warm weather, there was plenty of shade through the trees and along the river with some open farmland making sure you found the heat just about bearable. 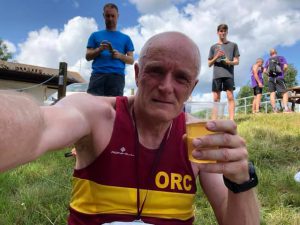 The route is challenging with some infamous Devon hills but being Carnival Week in the village the atmosphere is very much based on having fun. This year there were two distances – 7 & 5 miles – the shorter 5 mile being an easier route and missing out the fields. Robert Richards was the lone ORC runner here, completing the 7 mile course in 1hr 16mins.