Last Thursday Okehampton runner Kaie Sherjan travelled down to Cornwall to take part in another evening race organised by Purple Gecko Events, this one being held in Tehidy Country Park. Following a day of heavy showers, the sun was shining by the time the runners lined up at the start of this beautiful scenic race with plenty of hills. With 5k or 10k options Katie ran the longer distance and was pleasantly surprised to find that despite the hills she had managed to knock over a minute off her PB, finishing in 1.10.44. 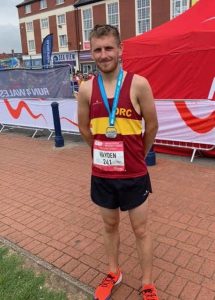 with Hayden Bond running the Barry Island 10k and Rachael Haydon the Totnes 10k. Having run the Barry Island 10k last year Hayden knew what to expect from the undulating course but this year the weather was more favourable with cooler conditions.  The course took in the all scenic points of Barry and the surrounding area, finishing on the sea front. Hayden was very pleased with a time of 38.44 and 58th position out of 2840 runners. Rachael hadn’t realised that the Totnes 10k was a multi-terrain race, but despite not being used to doing off road running she enjoyed the undulating course with its twisting paths through fields, woodland and riverbank trails, finishing in a very good time of 1hr.6min.

A longer distance was the focus for the Okehampton runners taking part in the Something Wild Running Festival. This is a friendly weekend-long running event based at Huccaby Farm on Dartmoor with trail races on both days, from 5k and 10k on Saturday to a Half Marathon, Marathon and a 50k Ultra on the Sunday. Okehampton Running Club was represented in all three distances on Sunday and enjoyed great success. In the Half Marathon, which being trail was actually 14.4 miles, Jo Page showed how versatile a runner she is, completing the course over rough terrain and with considerable ascent in a brilliant 2.24.05 to be first Lady. For Chris Turner, running the
marathon, this was his first long race since an injury over 12 months ago. He has doggedly fought back to fitness and was thrilled with his run here, finishing in 4.44.49 to also scoop first place for ORC. Gill Spinney also ran the marathon and continued Okehampton’s winning theme by taking
first place in the FV40 category with her time of 5.57.09. Robert Richards had planned to be running the Mendip Marauder Ultra this weekend but it had been cancelled at very short notice due to a road closure making the route impossible so he took a last minute place at the Ultra Marathon here to not waste his training. After a good first half Rob started to suffer from nausea, a problem he’s had in previous ultras, but he continued on to finish in 8.29.12. 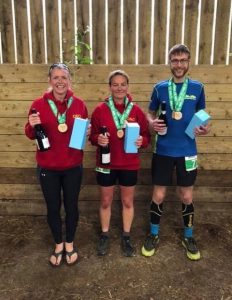 Three Okehampton runners made the trip to Indian Queens on a hot and humid Sunday morning for the Half Marathon organised by Newquay Roadrunners. This race incorporates part of the Cornish Grand Prix Series so competition is dependably high. A new course this year included 500 feet of climbing making it much tougher than in previous years. Starting in the town centre, the route includes large sections on the Goss Moor Trail before
and after climbing to the highest point of the course at Menna before a fast run back in through the town centre finishing at the race HQ. 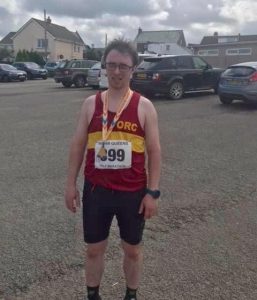 Out of the 606 finishers, first home for the club, 35th overall and 2nd MV55 was Steve Sincock in a time of 1:25:41 breaking the age group club record he set at Taunton earlier this year. Next in was Paul Evison (1:51:07) followed by Angus Farrelly opening his half marathon account in the club achievements in a time of 2:07:50.