There were two opportunities last week for ORC runners to get a fast 10k time under their belts with the Exeter 10k being held on both Wednesday and Thursday evenings. 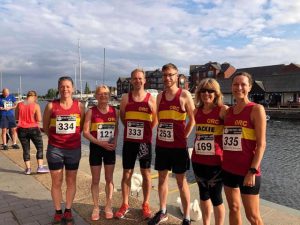 Six Okehampton runners headed to the race on Wednesday and it proved to be a good night of racing for the ORCs: Claudine Benstead won her category, Karen Vallance and Jackie Dawes achieved third place in their respective categories, Jeremy Tandy, Jo Page and Karen Vallance got personal best times for 10k, while Chris Turner had a storming run following his return from injury. Results: Jeremy Tandy; 38. 02, Chris Turner; 40 07, Jo Page; 41.32, Claudine Benstead; 41.44, Karen Vallance; 45.03, and Jackie Dawes; 52.22. 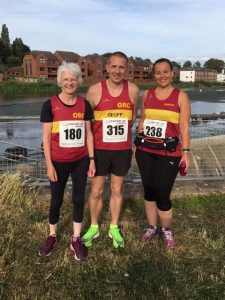 The following evening three more ORCs were racing here with Geoff Hill slightly disappointed with his run, but still finishing in 10th place in a time of 37.36. Jane Richardson was on form again, winning the FV70 category in 61.03 and Katie Sherjan happy to have knocked a minute off her previous best in 71.38.

Thursday evening also saw the annual Tavistock Town Relays and Okehampton Running Club rose to the challenge with enough runners to make up six teams. Four of these teams finished with podium positions, although disappointingly this year only the first placed team in each category were rewarded with medals. The 1.1 mile loop is predominantly flat with just one short hill on the far side of the river. First to go for the club was the junior team being led off with a great run by Mathew Richards who came in fourth overall to hand the baton to TJ, the younger of the Priday brothers. He ran another great lap, maintaining that position and on the third leg Harrison King managed to overtake one of the teams ahead to put them in third place at the changeover. Sam Priday was the anchor man and ran a superb leg, reducing the gap between the second team and ORC from one minute at changeover to just 11seconds at the finish line and recording the fastest time of the day by any junior. Third place overall out of 41 teams and second in their age category was a great result for this young team. Next were the Ladies teams, with ORC fielding two Senior Ladies and one Vet Ladies teams. Katie Littlejohns, Molly Marvin, Katherine Murray and Jo Page made up one of the senior teams and great running by all of them brought them home in 3rd place overall out of 43 teams, and 3rd in their age category. Okehampton’s Vet team of Emma Dean, Jo Bradford, Karen Vallance and Sarah Marvin also secured 3rd place in the Vet Club Women 35 category and a mixed age team of Karen Gear, Lucinda Walsh, Michelle Luddington and Melanie Priday were 28th overall. There were 50 teams in the men’s races and again ORC had three teams running. 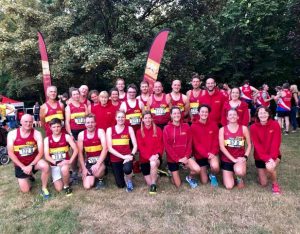 First home for the club were the senior men’s team of Hayden Bond, Graham Bryant, Tom Andrew and Robert Kelly, all running well to be 12th overall and 9th senior males. The Men’s Vet 45 team of Steve Sincock, Angus Farrell, Ed Dumpleton and Jeremy Tandy finished in 26th place overall and 7th in their age group, while the most senior team of Paul Evison, Robert Richards, Ian Page and Mike Westland were a very creditable 3rd in the Vet 50 category, despite having three runners who were actually over 60.

The Cardinham Summer Series 2019 continued with its fourth event on Friday 19th July – this instalment called “Fiendish” as the difficulty of the course increases. Set in Cardinham Woods near Bodmin, the course took full advantage of the forest tracks and ample elevation changes – with over 1000 feet of elevation gain and three lung-bursting climbs thrown in to the 10km course. 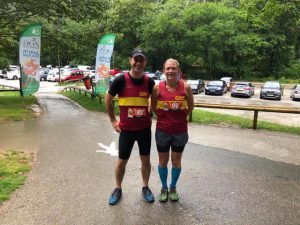 With torrential rain hammering down and only adding to the atmosphere, ORCs Jo Page and Jeremy Tandy lined up to start with 100 other runners. Jeremy was second overall in a time of 45.35, losing out by a mere 4 seconds from the winner. Jo was eleventh overall and second lady with a time of 51.09.

Geoff Hill was in Tavistock the following Saturday where, having had a slightly disappointing run at the Exeter 10k on Wednesday, he went on to set not only a PB, but also a club record and a course record in the Tavy 5k, finishing in 17.32 claiming a platinum award with this time.

Seven ORCs headed to the Halwill Gala on Saturday afternoon to compete in the 5-mile Fun Run. The course started from Halwill Junction and quickly headed out onto the forest tracks. In the lead, Hayden Bond had no trouble following the excellent course markings. His main concern was the dogged pursuit of Jeremy Tandy, who could never quite muster the speed to get ahead. 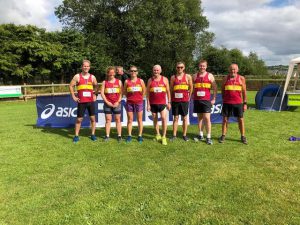 Finishing in 1st and 2nd place, with times of 31.48 and 31.55 Hayden and Jeremy made it a one-two finish for ORC. In 4th place with a time of 35.20, the next ORC to cross the line was Jo Page with another great performance, being First Lady on her fourth consecutive day of racing. Tom Andrew had his best run in ages in 6th place 38.24. Ian Page came home in 8th place in 38.43. Merv Rice finished in 40.26 and completing the ORC finishers was Karen Gear in 42.00 to cross the line as Second Lady.