The last Fell race in the series organised by Tavistock AC in conjunction with Tamar Trails took place last Wednesday. Starting at the Fox and Hound pub near Lydford, The Great Links Tor race was over a slightly longer distance than the previous ones at 6.25 miles and took the runners steadily uphill for the first 4 miles over Great Nodden, Great Links Tor and Brat Tor before a fast descent to run beside the river Lyd before crossing it for a sprint back to the pub. Okehampton had a good turnout with 9 adult runners and three juniors. In the junior race Aiden Spinney continued his winning streak, having won the Under 11’s at the previous race he repeated his success here, while Ollie King ran the same course and was third overall and first in the Under 9’s with Kiera Spinney second in this age group. In the adult race Jeremy Tandy was the first ORC home in 46.02 for 6th place and first M40, followed by Mike Baker in 55.29 and Merv Rice in 58.29 to take the first M60 prize. Katherine Murray finishing in 1.01.29 was the first of the ORC ladies, having only decided to enter at the last minute. She was followed by Gill Spinney in 1.06.10, Christine Fritsch in 1.09.18 and Lu Walsh, who enjoyed the race having done a recce run with the club the week before, finishing well in 1.10.36. Michelle Luddington found the route a little tougher than expected but ran well to come home in 1.24.48 and Janet White finished in 1.27.58 with her usual big smile, always enjoying her runs over the moors.

The fourth instalment of Freedom Racing’s 2019 Summer Sessions race series was held on Friday 23rd August at Godolphin Hill in the far reaches of Cornwall. With sunglasses on to dim the glare from the uncharacteristic bank holiday weekend sunshine, ORCs Jo Page and Jeremy Tandy lined up for the 7pm start. Heading up and out from the grounds of Godolphin House, the route twists and winds its way up Godolphin Hill itself before taking a rapid descent down the other side. A short road section brings runners to the base of Tregonning Hill and 110 metres of climbing to reach the top. Runner’s burning legs are soon forgotten as they are greeted by one of the best the views in West Cornwall. To the left, the purple shadows of dusk consumed the horizon, while on the right the setting sun glittered on the sea – its light picking out the purple heather and bright yellow gorse. With no time to stop, runners head back down and onto another road section before a final race up and over Godolphin Hill once again. A fast and technical downhill dash to the finish line completes the route. Jeremy Tandy finished in 6th place overall (39 min 53 sec). Jo Page was 1st Lady and 19th overall (45 min 31 sec). Sunshine, a great route, breathtaking views (and climbs!), friendly atmosphere and cake from the Godolphin House National Trust cafe made for a perfect start to the long weekend. 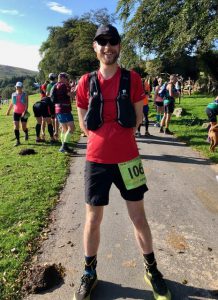 The Bank Holiday weekend brought welcome sunshine and a return to summer for most people, but it made for uncomfortable running conditions for those taking part in Puretrail’s Big Day Out. This comprises two races, The Crossing, a 36mile ultra marathon traversing Dartmoor from north to south, starting at Belstone on the northern edge to Ivybridge on its southern flank, and The Great Escape, which takes in the last 15miles of the ultra from Princetown to Ivybridge. With no shade out on the moors the heat took its toll, despite a refreshing breeze over the higher parts, with only 91 of the 120 starters finishing the Crossing in which Okehampton’s Chris Turner was taking part. He had completed this race two years ago but has had injuries almost ever since then that have kept him sidelined. Having slowly worked his way back to fitness, particularly targeting this race, he was pleased to complete in a very good time of 7.35.58.