Last weekend two Okehampton Running Club members, Jo Page and Anne Binns, enjoyed great success at the Chicago Marathon, doing themselves and the club proud. Both had run qualifying times for this marathon which is one of the six Abbott World Marathon Majors and for Anne it was her third of the six having already completed London and Boston. Flying out several days before they enjoyed a few days holiday and warmed up for the marathon by running the Chicago 5k the day before along with Anne’s husband John. 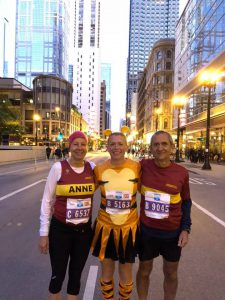 Unfortunately, despite her training going exactly to plan, Anne developed a slight knee pain during a park run just before flying out and was concerned that the pain was still present during this 5k, but was determined to run and get her coveted star to count towards the six races even if it meant a slow time. A cold but clear sunny day greeted the runners and both ladies rose to the occasion and produced superb runs. Jo Page had only run her first marathon just over a year ago but improved on that with a good run in Manchester in the spring, but here she knocked over two minutes off that time to run a new PB of 3.14.09, which not only set new club record and a qualifying time for the New York Marathon, but makes her the first club lady to secure a Championship entry time for the London Marathon. Anne limped round the first three miles, but found the pain in her knee gradually eased and returned to the sort of pace she had trained for, coming home in 3.52.48, setting a new PB, a new club age group record and giving her a guaranteed entry to New York, another World Marathon Major.
The two ORCs also met up with Marilyn Cooper’s son Peter, who has set himself the goal of completing the World Majors in memory of his mother who had hoped to achieve this herself before her unexpected death three years ago and he completed in 4.33.07. 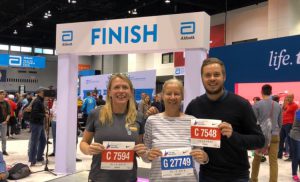