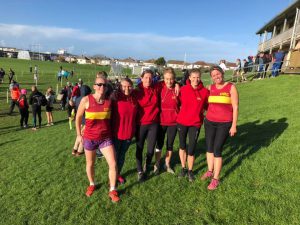 After a sombre morning of reflection on Remembrance Sunday, athletes gathered at the second event in this year’s Westward League X-Country held in Newquay, incorporating the Cornish County Championships. Okehampton had struggled a bit to fill teams due to injury and other commitments but managed to field a Senior and Vet team in the ladies and a senior team in the men’s race, with some juniors also representing the club. Despite the previous day’s rain the conditions underfoot were remarkably dry and the races took place in beautiful sunshine, but with a strong and very cold wind. Having his first Westward League outing, young Tom Priday was the first to run in the Under 13 boys coming home strongly to overtake several runners in the finishing straight. The Ladies were next, missing League stalwarts Sarah and Molly Marvin this time, but Jo Page secured a some good points for the club with another very strong run, while Jo Bradford and Karen King came home together, their places counting for both Senior and Vet Teams. Next was Jane Jackson, finishing one place ahead of Christine Fritsch who she’d overtaken on the final hill, but not managing to overhaul the next runner. Next in was Mel Priday who, with two sons running, had decided to don her ORC vest and have her first run in the Ladies team here. The two Under 15 boys were next up with Sam Priday having another great run to finish eighth in a field of top class runners and Harrison King keeping going well after racing three times in the previous four days. In the Men’s race Hugh Robinson seemed to have recovered well from his Cornish Marathon the weekend before to come in first for the club, his time being over a minute faster than his run here last year. Westward League rookie Hayden Bond ran a very impressive race, keeping Hugh in his sights all the way round to finish just three places behind him. Stephen Sincock was next to gain some good vet points with two more runners separating him from Graham Bryant. Christian Davies was not only taking part in his first Westward League race, but also only his second race ever and had a very good run to come home next ahead of Stuart Page. Unfortunately Ian Page pulled a calf muscle on the second lap and had to pull up, very disappointing as he had won his age category at the Plymouth meeting. 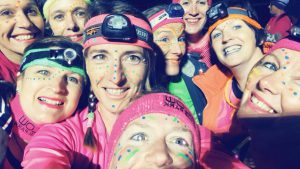 On Saturday evening a large ORC contingent took part in the Exeter Glow in the Park, a fun event held at Westpoint. Described as the ultimate night time neon event for families and friends, this 5k run has a course of 2 laps on paths. tracks and some grass, the way being marked by flashing arrows. Competitors could walk, jog, run or even dance their way round, passing through “glow zones” on the way with the money raised from this going to two Downes Syndrome charities. A great time was had by all ORCs and their families who took part, all entering the spirit of the evening with fluorescent face paint and colourful hi-viz clothing.

Thanks to Jane Jackson for your reporting