After an original forecast for wind and rain on Sunday, there were actually near perfect conditions for the Bideford 10 miler where Okehampton Running Club was once again well represented with 23 runners taking part. This very popular race has a fast and flat course that starts on Bideford Quay and follows the road out to Yelland before returning along the Tarka Trail. With the good conditions and a fast course the ORCs managed to amass no less than 12 personal best times, two club records and three age category places in a very competitive race. First home for the club was Hayden Bond, determined to complete in around 65mins, but exceeding this target to come home in 1:04:01 to set a huge PB. Stephen Sincock was next home for Okehampton with a very impressive run, his time of 1.05.23 securing him 1st MV55 and setting a new age category club record, with Andrew Vernon coming home next in 1.07.49to be 3rd MV50. Next to finish was also the first ORC lady runner, Jo Page, her third race in eight days not seeming to affect her performance and finishing in an incredible 1.09.03 to set a new overall Ladies club record in her first race over this distance. Vet runner Jane Richardson was the only lady ORC to get an age category place, coming 3rd FV65 in 1.37.19, amazingly still setting new PB’s at an age when most are getting slower.

Four ORCs had a successful outing to the Cornish Marathon on Sunday. With over 2,000 feet of ascent and a steep climb from miles 24 to 25, this is a tough marathon but still a very popular one for runners who really like to test themselves. Hugh Robinson was the first home for the club in 3.14.06, an excellent time for such a hilly race and one that earned him a top 10 place and a win in the MV40 category. Paul Carter always runs well here and he didn’t disappoint again with a time of 3.19.19 to come 15th overall. Roger Voaden finished in 3.24.30 and Graham Bryant in 3.36.50, the collective times for all four (and after a recount) giving them the  2nd Male Team prize.

On Halloween Jo Page took part in a night race organised by Jolly Running. The Dark Halloween 10k Trail race started from the Drum inn, Cockington and took the runners on a hilly route through Cockington and Scasdon Woods with terrain varying from paths, grass tracks and woodland trails to small tarmac sections. With her Tavy 7 run three days earlier in her legs and the Bideford 10 miler looming the following weekend, Jo slightly regretted entering this, especially at the point where she and some other runners took the wrong course in the dark, but the lure of a “glow-in-the-dark” medal was enough to keep her going to complete in 1.02.12.

The previous weekend Christine Fritsch travelled up to the Peak District to run a fell race that would give her the qualification she needed to enter the Three Peaks Race next year. Despite her many off-road races, the Three Peaks Race required evidence of completing a longer fell race than most in this area so she entered the Grin and Bear it with a feeling of it just ticking a box. However it turned out to be a lovely race and she thoroughly enjoyed it, despite it being a tough 17 miles, finishing in 3.57.49.

Last Thursday saw a big milestone for the club with the first ever ORC Junior Athletics Club training session being held in Okehampton College sports hall. Committee member Rob Hicks raised the idea of a junior section at the 2017 club AGM and with the support of the Running Club and OCRA this idea became a reality and the latest sporting opportunity for children in the area. Rob first had to complete England Athletics training courses to qualify fully as a coach and was pleased with the feedback from parents and children after the first session where 21 young athletes between the ages of 8 and 11 enjoyed an hour of javelin throwing, long jump techniques and relay running. All aspects of athletics will be covered in future sessions and as members of an Affiliated club the children will be able to enter EA competitions if the they wish. 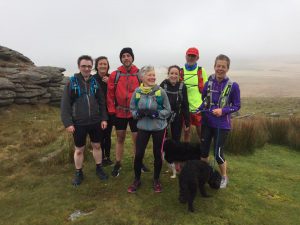 Thank you Jane for your continued efforts.