The Great West Run is a popular race and always attracts a big entries and this year with over 2,900 finishers. The course changed slightly with the race starting and finishing in Exeter Arena for the first time, taking in the city centre, the university and country lanes through Stoke Woods.

There were some great performances from the club with four managing PB’s on this tough and quite hilly course. First home for the club was Rob Kelly, having a fantastic run to finish in 1.23.12. Next home was Chris Turner, who has improved off the scale in the last 12 months, his time of 1.25.56 giving him a new PB. Geoff Hill, still trying to stay one step ahead of the injuries that plague his races, ran well to finish a respectable 1.30.48, with George Haskell coming home in 1.35.45, having struggled to get his pace right throughout. 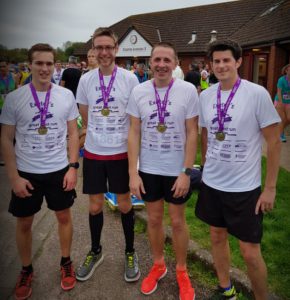 Okehampton’s first ladies were the next in, with Heidi Wills and Jackie Dawes running together and their time of 1.52.55 being a new PB for Heidi. 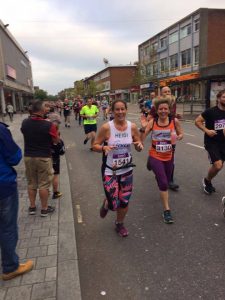 Robert Richards was delighted with his finishing time of 1.57.13, a new PB, beating his previous one set over 25 years ago! Robert is currently training for the Exmoor Marathon in two weeks’ time and says the club has really helped him with his training. Mike Westland gave his usual 100% despite having had a long injury layoff and finished in 2.00.41. Jo Bradford had been disappointed with her first half marathon run at Barnstaple three weeks ago due to being unwell, but had a better time here, running with club mate Viki Heyer, and the pair finishing in 2.06.26 to give Jo a new PB. Katie Bolt was running her first half marathon here and thoroughly enjoyed the experience, coming home in 2.34.16.
Other times included; Deborah Cunningham; 2.15.39, Vicky Hall; 2.17.47, Jane Richardson; 2.26.59, Cathy Carey; 2.30.38, Claire Sprague; 2.37.08, Sarah Bell; 2.57.43.

At the Eden Project in Cornwall there were three club runners, two in the full marathon and one in the half. Both these routes follow challenging multi-terrain courses, taking the runners through the spoil heaps known as the “Cornish Alps”, the former Luxulyan granite works, now reclaimed by nature and the Eden Project itself set in the former clay pit. In the full marathon Karen Skye put in a terrific performance over a very muddy course to come home in 3.59.27 to be fourth Lady and first in her age group. Lucy Skye’s race didn’t go quite so well after struggling with a virus all week but she was happy to complete in 4.28.37.

In the half marathon lone Abi Colton ran a good race finishing just outside her sub-2 hour target in 2.02.54. 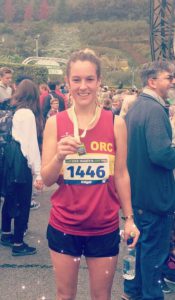 Many thanks to Jane Jackson for the run report