It was another top draw performance from our amazing club this weekend with a huge turnout for the Tavy 7, records tumbling, team success’s across the board and much further afield a more sedate running experience in Edinburgh.

At the Tavy 7 on Sunday, the remnants of Storm Brian failed to stop our runners from putting in some great performances. The 7 mile course is surprisingly fast, all on roads except for the start and finish which are into a field. This popular race had record entries this year, despite the continued threat of showers that was ever present the wind was brutal on the exposed sections of the course. With the wet conditions the start was delayed 15mins to allow runners to safely navigate the parking area and get to the start point. Unfortunately the gateway had become a quagmire with vehicles and foot traffic through it, so runners were slowed to a ‘tiptoe through the mud’ pace on the way out and sprint finishes were delayed on the return. Nineteen of our runners competed this year and what an awesome display and a brilliant team effort.

First Male home for the club was Roger Voaden in 45.06, using this race as a final week’s taper before he runs the Snowdonia Marathon next weekend. Just one runner separated him from fellow club mate Graham Bryant, coming back to form to finish in 45.36 with Andy Vernon next in 47.54. These three, together with Ed Dumpleton who was next in 49.29, made up Okehampton’s Men’s Team who took 1st place.

The ladies were headed by Katie Littlejohns, for once leaving her usual off road moorland running and putting in a great run to finish in 50.37, setting a new club record for the distance. New club member Jennie Bruce, running her first ever race, is proving to be a great prospect for the future, having a natural talent which meant that despite very little training and no race experience at all she put in a great performance to finish in 53.25. Third home was Monika Richards finishing in 59.35. Katie, Monika and Jane Jackson made up Okehampton’s Ladies’ Team also scooping 1st prize, with Jennie’s time not being included having entered before joining the club.

The more senior members certainly did the club and themselves proud with Jane Jackson’s time of 1.00.40 won her the 1st FV60 prize and was also a new club record for her age category. Ged Fitzgibbon taking the 2nd MV65 prize in a time of 1.01.53, bettering his own club record for the distance set last year at the same venue. Janet White also had a better run this year with her time of 1.13.52 winning her the 2nd FV65 trophy. Jane Richardson is still on a roll with some impressive runs recently. Having knocked 8 minutes off her half marathon PB at the Great West Run last week, she ran another PB, here coming home in 1.14.31 to take the 3rd FV65 prize.

Much further afield and proving that running as a hobby is not all about competing or pitting yourself against the elements Tracey Mills and Rachel Holland along with some friends took to a more relaxed jog around the beautiful sights of Edinburgh. Conquering Arthurs seat among other historic sites with the Edinburgh Marathon Festival running tours was a precursor to afternoon tea! 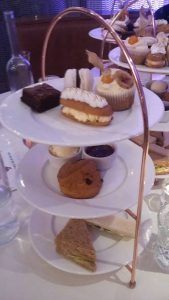 With the winter season shortly over the horizon, head torches, warmer clothing and impressive headgear is the order of the day and the winner this week in the amazing head gear category at the Tavy 7 goes to….. Mike Baker.

Many thanks to Jane Jackson for the run report