At the Simply Health Great South Run in Portsmouth on Sunday Okehampton Running Club was represented by a single member, Hugh Robinson. This race, considered the world’s leading 10 mile race, has a fast flat course and attracts over 20,000 runners, with support from crowds all around the city. Having recently run a marathon pb at Barnstaple, Hugh showed he is still in great form with an outstanding run in his first ever 10 mile race, finishing in 1.02.48 to set the standard high for any future pb’s and come a very impressive 166th out of such a massive field. 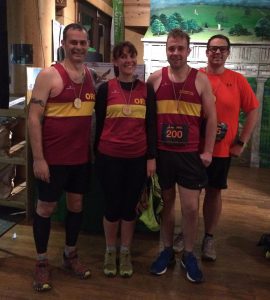 Saturday evening saw the start of the Wild Night Run winter night race series with the Night Templar 10k, held in Stover Country Park, Newton Abbot. There were four Okehampton Running Club members who took part, with Tom Andrew first home, running a great race to finish inside the top twenty in a time of 47.33. Husband and wife Phil and Jo Turner ran together coming home in 1.00.57, Jo’s first race since having some achilles tendon problems. Liam Keen finished in 1.05.02, a good result after running the Great West Run the week before with little recent training.

The Plym Trail Autumn Marathons took place over the weekend with two Okehampton runners, Geoff Hill and Roger Voaden competing on Saturday, while Roger did the double, running on both Saturday and Sunday. The marathon course is a quick up and down in Clearbrook village followed by two ‘out-and-back’ runs on cycle route 27, a disused railway line. With beautiful weather on both days giving excellent running conditions Roger finished day one in 3.20.31 to come third while Geoff Hill was fourth in 3.39.22. The second day saw Roger come home just four minutes slower in 3.24.02 to be placed first, beating the winner of Saturday’s race.

There were two new pb’s set at parkruns on Saturday. Jane Richardson runs the Exeter park run most weekends and is running very strongly at present, so was pleased to find she’d shaved a few more seconds off her recent PB, finishing in 28.12. 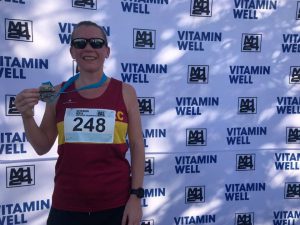 Jo Page was on holiday in Copenhagen where she took part in the Amager Fælled Parkrun and set a new PB of 20.40 over the fast flat course. Jo Page was keen to get some more races under her belt while in Copenhagen and found a last minute place in a charity 10k, the Vitamin Well and MN24 10k. This was a two lap, flat course in Kalvebod Park in southern Copenhagen where Jo ran an excellent race on a slightly over-distance course to come fourth lady in a time of 44.36.

Many thanks as always to Jane Jackson for your reporting and editing.