After two days of gale force winds and rain, the wind finally dropped, although the rain continued on Sunday morning for the two races that occupied Okehampton Running Club members. Down in Cornwall, the Eden Project Marathon and Half Marathon have become a firm fixture in the running calendar, where the hilly multi-terrain courses follow a challenging route through areas of spectacular mining heritage and beautiful countryside, taking in the spoil heaps known as the “Cornish Alps” and the old Luxulyan granite works now reclaimed by nature. In the full marathon Okehampton was represented by the club’s most experienced marathon runner, Roger Voaden and a complete newcomer to the distance, Mags Jarvis. Despite having run for most of her life, Mags had never tried running a marathon, so at the age of 63 and having been diagnosed with Parkinson’s five years ago she decided to rectify this. Eden’s quite a tough course and wouldn’t be everyone’s choice for a marathon debut, but Mags prefers this type of terrain with its changes of pace and elevation, and luckily the rain stopped and the sun shone for the second half making it more enjoyable. Roger was happy to complete his 25th marathon this year, his 93rd in total in 3.37.25. Mags came home in 5.12.31, to be first FV60, an incredible and inspirational achievement. 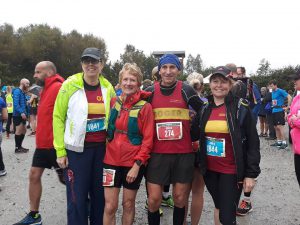 In the half marathon Alec Robinson was the first ORC home in a good time of 1.41.52, while Carole Cornwall and Katy Speak ran together as usual, finishing in 2.26.57, then staying on to cheer Mags home in the marathon. 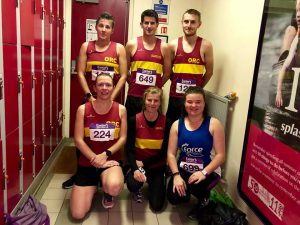 At the Great West Run Half Marathon in Exeter, there were a few less Okehampton runners than in recent years, but those who took part had some great results. Starting at the Exeter Arena, this half marathon has it all with a journey through the city centre, followed by pretty country lanes with stunning views across Exeter and a fantastic stadium finish. First ORC home was Rob Kelly with a run that came within 4 seconds of his his PB set here five years ago, with his time of 1.21.09 giving him 22nd place out of a field of over 2,200 runners. After setting a new PB over the flat Cardiff Half course last week, Hayden Bond had another terrific run here with the hills only slowing him down slightly to finish in 1.27.42. First ORC lady home was the ever improving Jo Page who continues to amaze her club mates with her ability to not only race so frequently but to get faster with every race. Her time of 1.33.15 knocked another four and a half minutes off the PB she set only three weeks ago at Disneyland Parisand set a new club record for the distance. Monika Richards was next in 1.52.12 with Paul Jelley coming home in 2.03,43. Christine Fritsch didn’t quite get the time she was aiming for, but still set a new PB here in 2.04.13. Rachael Hayden was pleased with her time of 2.15.21 which was faster than her Bristol Half time three weeks ago. Liam Keen was glad to complete in 2.24.45 having done very little running recently and Katie Bolt’s time of 2.31.10 was faster than her time round this course last year. 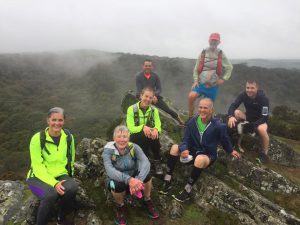 Not forgetting off course the Autumnal moor running has started so well done for everyone braving the weather, but do all look out on our Facebook page for other regular meets.

Thanks as always to Jane Jackson for your wonderful reporting.