It was the Belstone Village Fair this weekend, Okehampton Running Club organise this traditional race which has been going for many years. The race started in the village green as part of the fair celebrations approximately 3.2 miles with a climb of around 300m over rough open terrain to the top of Cosden Hill and back. 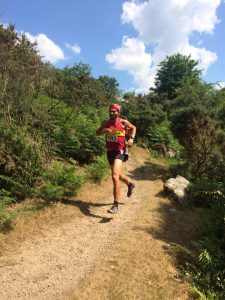 35 keen runners set off in 29 degree heat at the Cosdon Hill race. Spectators were treated to a fierce battle for first place with an elite group all running close to the course record of 29m06s. 2017 winner and ORC Rob Hicks flew down the hill leading a group of three down the path into the valley with 2015 winner Tim Lenton hot on his heels as they were lost from the view from Belstone common. When they re-appeared on the path up to the green Tim had taken the lead and both men turned themselves inside out battling to be the first to the line, with Tim triumphing in 29m22s and Rob coming through just 5 seconds later. Paul Crease was the next ORC back, winning the MV40 and taking 5th overall in a time of 33:36. 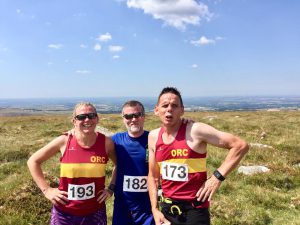 In the Female division Jo Page (who had turned up to marshal only to find we had plenty of help) continued her impressive form by winning in 49:09. Ruth Bushell took the FV50 in 1h2m28s and Janet White ran strong to the finish taking the FV60 category in 1h4m24s. 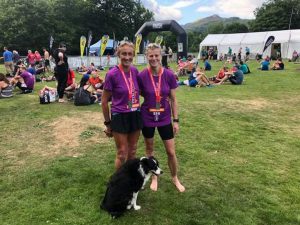 Further afield in the Lake District was two of our most respected lady trail runners, Jane Jackson and Christine Frisch completed their Ultra Marathon. They raced the 55km Ultimate Trails Challenge which is a testing 55km ultra marathon course through some of the most dramatic mountain scenery in the Lake District. The tough, challenging course will certainly live up to its billing as the most picturesque ultra-marathon in the UK. The 55km route also includes 3 mountain passes, with 7,000ft ascent/descent along with 5 memorable feed stations.

Starting and finishing in Ambleside, the 55km Ultimate Trails Challenge takes in a complete circuit of the central Lake District, along well marked and marshalled footpaths and bridleways. 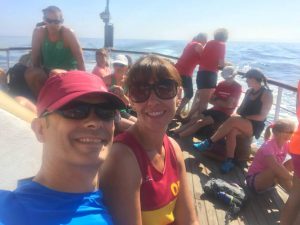 Lastly this weekend another of Okehampton Running Club seasoned lady Trail runner Jo-Anne Turner took her husband Phil Turner on a boat trip to the Island of Lundy to run the first long half marathon around this beautiful island.

Lundy Race the most unique Trail running experience is Fourteen (ish) miles of pristine, wildlife encrusted tracks tended by the Landmark Trust are open for us to run, walk and crawl. Whichever way you do it, you will visit all 3 lighthouses traversing the undulating eastern and western clifftops, cling to the precipitous slopes and run along the central spine of the island (as well as a few side tracks). You will definitely discover this beautiful and rugged island in all its glorious entirety, on foot and at your own pace. Jo-Anne complete in 3:12.55 with Phil behind in 3:12.56.

Thanks you to Robert Richards, Hugh Robinson and Mags Jarvis for compiling the material.