Having failed to get through the general ballot for the London Marathon, Okehampton Running Club member Monika Richards took up the offer from the Edinburgh Marathon to give a guaranteed place to those who had been unsuccessful for London. This was to be the first marathon for Monika and is an ideal choice with a fast flat course and plenty of support throughout the race. The day started cool and misty but cleared to sunshine during the race and despite its coastal location, the wind was not an issue. Monika had a terrific run and was more than happy with her finishing time of 4.01.03. 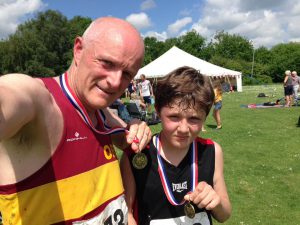 Three Okehampton runners attended the Chagford Two Hills race on Bank Holiday Monday. Deborah Cunningham, Alec Robinson and Robert Richards, Robert was accompanied by his eldest son Matthew, who is a veteran of this event. The event runs every year from the Memorial grounds in Chagford and take runner up two very steep hills, Meldon Hill and Nattadon Hill, in total a 1076 feet climb. Although the distance is short, only 3.5miles it is regarded as a rather tough event. Those newcomers to this event are always made aware of the infamous bog that hovers between the two hills. Suitably placed to sap any last remaining energy from you just before you ascend up the second hill. No official times are available but Alec was first in with a time of close to 35mins, followed by Robert in a time of 40mins and Deborah third in just under one hour. 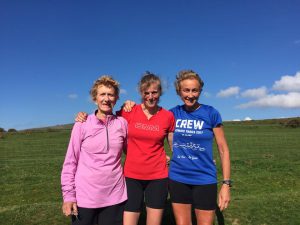 Three more Okehampton runners took on the Dartmoor 600s Challenge last Sunday. This is a self-navigating run of approximately 19 miles to complete all five of the Dartmoor peaks over 600m – Cut Hill, Whitehorse, Hangingstone Hill, Yes Tor and High Willhays. For Jane Jackson and Mags Jarvis this was the first time they had attempted it, while Christine Fristch had already completed it twice, but having done the previous two in an anti-clockwise loop, this time chose to do it clockwise, leaving some of the tougher going to the later stages. Unfortunately Christine’s knee started to hurt after about six miles and got progressively worse, so most of the second half was walked, finally completing it in 5hrs 23min.