Last Saturday saw the 20th Anniversary of the longest single lap road ultra marathon in the country, the Dartmoor Discovery. To mark this milestone in the race’s history the usual 32 mile course was changed to 34 miles, the distance of the original race. This didn’t deter four of our intrepid runners from taking on the challenge. Paul Carter, Robert Kelly and Roger Voaden were already Discovery veterans but this was not only the first Discovery, but a first ultra of any kind for Andy Vallance. Starting in Postbridge the course takes the runners through Dartmeet, Poundsgate, Widecombe in the Moor and Postbridge before making its way back to Princetown. On a clear sunny day the countryside was beautiful but the hills are steep and relentless. This is Robert Kelly’s favourite race and ever since he ran his first one four years ago he has got progressively faster over the course. This year he was first ORC home in a very impressive time of 4.32.32, just one minute slower than last year’s time over the shorter course and finishing in 6th place overall. Stepping up to a longer distance was no trouble for Andy Vallance who, despite not having a great preparation for the race, was the next home for the club in 4.54.31 to come 12th  overall. Paul Carter had another good race here, finishing in 5.00.59 to take the 2nd MV50 prize and Roger Voaden finished in 5.17.05. Okehampton was the first club to have three members home, but due to the format of how the places are calculated Rob, Andy and Paul in fact took the second team prize. 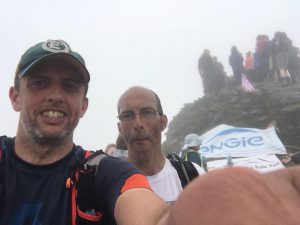 Okehampton runners are always looking to take on new challenges , Paul Crease, certainly did that on Saturday when he and Paul Bradford, husband of Jo Bradford, tackled the Welsh 1,000s Race. Running in the pairs Long Challenge Race they ran the five peaks of Snowdonia over 1,000 metres, finishing on the summit of Snowdon. Starting at sea level the first two miles are relatively flat before the serious climbing starts with a massive five mile climb to the first summit at 3,400ft. Paul is no stranger to running hills but this challenge was huge, with over 9,000ft of gruelling ascent across the 20 mile route. Although marshalled navigational skills are needed as well as strength and endurance. Their task was made harder in the last two miles due to the congestion caused by large numbers of tourists on the path. They finished together in an incredible 6.12.47 to come home second pair and then faced another 4.5 mile jog back to the race HQ! 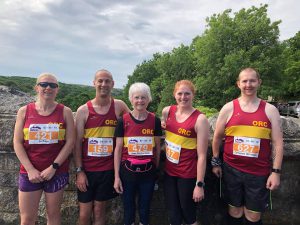 There was some controversy at the Burrator 10k on Sunday. Here Okehampton had five runners taking part in this popular race, held in a stunningly beautiful setting, where the fast flat course does one and 2/3rds loops of the reservoir. The start and finish were moved back last year to avoid congestion in the early stages and the course has an England Athletics certificate of measurement. However this year all the runners recorded their distance as 6.4 miles instead of 6.2. and following a race organisers enquiry the decision has been taken to get the course re-measured. Despite this there were some good times recorded by the ORCs taking part. First home was Ed Dumpleton, finishing in 43.09, followed by Jo Page in 46.52. Emma Dean ran a very impressive race, third in her aged category and taking four minutes off her PB despite the extra distance, to come home in 50.30. They were followed by Cam Whitelaw in 1.00.11 and Jane Richardson in 1.05.09 who was amazing coming in second for her age category.

There was a slight over-distance issue at the Barnstaple parkrun too where Jane Jackson got her platinum award for 5k in a time of 24.19, but the extra distance had added approximately 24secs to her time.