Christmas visits away provided ORCs with opportunities to run some different races. Christine Fritsch was up in the Lake District and took on the Wansfell Fell race. 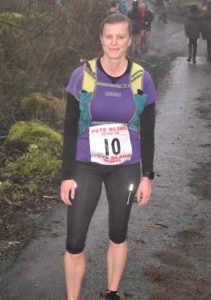 This a typical fell race of one mile up to the top of the fell and then straight back down. Sounds easy enough, but the route is extremely steep and rough underfoot, and with wet and slippery conditions Christine ended up on her backside a couple of times on the descent, but still enjoyed herself, finishing in 38.30.

Jo Page found a quirky race while staying in Shropshire and ran the Sunrise to Sunset Half Marathon. This was loops round a 1k cycle route course and after completing each lap her counting card was stamped. 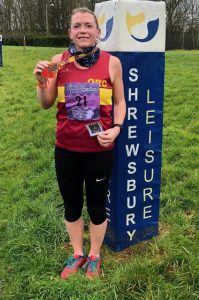 After having her card stamped for the 21st time bell was rung to signal she had finished and Jo was told she was the overall winner, which was a complete surprise to her, with a finish time of 1.35.45.

On New Years Day sixteen ORCS resisted partying too late on New Year’s Eve to enjoy the mud and fun of the traditional Brown Willy run. Supposedly not a race but a social run, the kudos of being to the summit of Brown Willy and back first makes for a fast race at the front. First ORC home was Rob Hicks while Jo Page, who was second lady last year, went one better to be first lady home this year. While the going was perhaps not quite as wet as last year all came home with a fair covering of mud to claim their commemorative fridge magnet and retire to the pub for a drink.

Sunday saw a new race on the calendar, the New Year’s 5 Miler, a flat and fast 3 lap route round Exeter’s Riverside playing field where cool and calm conditions made for some great times. Four ORCs ran here, all finishing in the top 3 of their age categories and three setting new club records. 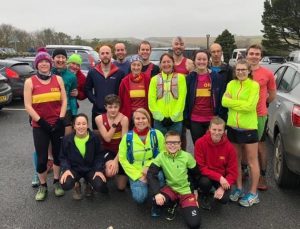 Last weekend saw three ORCs enjoy success at the Southwest X-Country Championships at Aldon Hill, near Yeovil. Jo Page was part of the Devon Senior Ladies team whose impressive running secured them the silver medal place. Mathew Richards had a great run in the Under 15 Boys to be placed 18th overall and 4th Devon boy, the U15 Devon Team taking the silver medal. Mathew has now been selected to go forward to compete in the Inter Counties X-Country Championships at Loughborough in March. Sam Priday put in a strong performance in the very competitive Under 17 Mens race, the Devon Team winning the County Team gold, and has also been selected for the Inter Counties Championships.

ORC Jeremy Tandy took a trip to Cornwall for Freedom Racing’s Clowance Woods Race. This is a 4mile, two lap route starting in front of Clowance House and following muddy trails mainly through woodland. Jeremy enjoyed the run, coming 5th overall and 4th Male in a time of 25.44.