Jo Page had a characteristically busy weekend, doing three races in Cornwall on the same day!  The ‘Smuggler’s Scuttler’ pirate and smuggling half marathon route runs from Land’s End to the top of Cape

Cornwall and back again.  The race starts at Peal Point at Land’s End, goes past the Mayon watchtower and into Sennen Cove and along the pathways to Priests Cove, up to the top of Cape Cornwall and then returns. Once at the top, runners pick up the loot (including rum, coins, gems and teabags) and bring them back to the finish or risk disqualification. No booty no medal! This race had the potential to have some lovely views but sadly they were not present during the race this time due to the sea mist. Jo was the 1st Female, 9th overall and crossed the line in a time of 2:14:23 which is a course record by over 17 minutes.

Later that day Jo joined hundreds of runners and music lovers on Watergate Bay at sunset to do the Rock 2 Rock races. 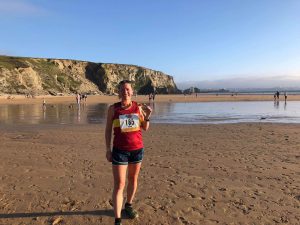 The tide only goes low enough to run from one rock to the other rock at each end of the beach 3 times a year. Jo ran both the 2k and the 5k beach race which was then followed by a beach party and all topped off with a Firework display!

Angus Farrelly and Alec Robinson finished a hard North Devon AONB Half Marathon in Woolacombe today on a course which offers as many stunning views as it does challenging hills. The multi-terrain course involves roads, trails, beaches, fields, steps and the incredible South West Coast Path. 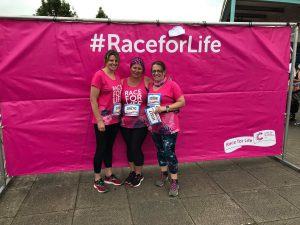 Jo Teixeira, Lynsey King and Vanessa King took on a hot Barnstaple Race for Life 10K on Sunday, finishing in 1:10:14. The ladies were running a 10K distance after successfully completing a couch to 5K programme over 10 weeks with Okehampton Running Club last September.  They are an inspiration to others, so if you have felt inspired by them and are interested in doing a couch to 5k, the ORCs will be starting the next programme in September 2019, please see their website for details.