Two ORC runners ventured out on Wednesday evening to take part in a classic fell race on
beautiful Dartmoor. Mervin Rice and Christine Fritsch took part in the Summer Solstice Fell
Race. This is a low key event in typically relaxed fell running style, on a quite undulated 5
mile course over typical moorland ground, starting from Merrivale. It was a perfect evening; after a miserable morning the sun came out and a bit of a breeze kept the midges away.

Both Mervin and Christine were happy with their performances. Mervin came home as first
MV60 in a very good time of 53:12. Christine finished in 1:00:18, not quite achieving her
goal of a sub 1 hour time, but not far off, coming 2 nd in the FV45 age category.

Race To The King

The sudden change in weather on Saturday to a taste of what summer should be like was
not appreciated by Okehampton runner Jane Jackson who was having her first attempt at a 50mile ultra marathon. Having done several ultras of up to 39 miles in distance, her choice for a 50 miler was Race To The King, a linear race starting near Arundel and following the South Downs Way west to finish on the steps of Winchester Cathedral. 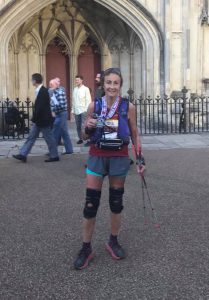 Despite the undulating nature of the rolling South Downs it still packed in some long, steep ascents to sap the energy and strength from increasingly tired legs. Even more energy sapping was the hot sunny day, making runners want to linger in the shade where the path took them through woodland and needing to take on board plenty of fluids and salty food at the generously stocked feed stations. Jane had been very unsure as to whether to take up her place in this race having injured her knee some weeks before which was still giving her trouble, only deciding to have a go a week before the race. With her main aim being just to complete Jane intended to take it fairly easy round the route (which turned out to actually be 55.4 miles) but still pushed herself to attack the hills and get as good a time as she could. This resulted in her finishing in a good time of 13hr 35min 22 sec and winning the FV60 age category.

Saturday 22 June saw the return of the Tsunami Ocean Trails, a series of trail races over
different distances: 7 miles, 16 miles, 26 miles (marathon), 37 miles (ultra) and finally a
whopping 75 miles for the “Tsunami 24” with a 24-hour cutoff. The race routes follow the
north Devon and Cornish coast path, with each race starting at separate points along the
coast, but all races finishing in Bude.
ORC was represented in the 7, 16, marathon and ultra races. In the ultra, Rob Richards was
first to start racing – he set of from Westward Ho! with unfinished business from last year’s
Tsunami to resolve! Next up was Gill Spinney in the marathon, starting from Clovelly (yes,
down at the harbour – the race organisers made them walk all the way to the bottom of the
hill before “running” back up!). Christine Fritsch, Jo Page and Jeremy Tandy began the 16 at Hartland Quay. And finally, Phil Spinney set off on the 7 from Morwenstow – but not before Jo page had stopped at the aid station there on route and had a chat while refuelling on Haribos! 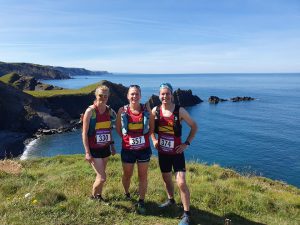 The sun was shining for the Tsunami in 2019 showing off the stunning Devon and Cornish
coastal scenery at its best. The downside was the heat making the conditions tough.
Fortunately the blue sea and picturesque beaches along the way were a great distraction
when sweating up the steep hills. Distraction was best avoided on the steep downward
slopes though! No matter which distance, crossing the line in Bude was a relief; made more
special by so many of the runners and their supporters staying around all day to clap in their fellow competitors. A couple who’d booked Bude Castle (the finish point and Race HQ) for their wedding got in on the act too, with a “run” through the finish to be presented with finishers medals as an extra memory on their special day.
In the 7 mile race, Phil Spinney finished in 2 hours, 4 minutes and 49 seconds (35th place,
5th in category) and celebrated with a refreshing foot soak in the canal.
The 16 mile race saw Jeremy Tandy across the line in first place with a time of 2 hours, 56
minutes and 32 seconds. Jo Page kept up the ORC winning streak, crossing in 9th overall and first female. Her time was 3 hours, 18 minutes and 45 seconds. Veteran Tsunami runner
Christine Fritsch finished in 4 hours, 21 minutes and 2 seconds (35th place, 4th in category).
Gill Spinney, in her first ever marathon, did fantastically well to finish such a tough course in 7 hours, 49 minutes and 31 seconds (32nd place, 4th in category).
Finally, Rob Richards crossed the line with minutes to spare before the cutoff in 11 hours
and 43 minutes dead.

As he lay on the floor amid applause from the ORC team he was heard to mutter “never again”! But he’d done enough to collect the UTMB points he needed for his next crazy running adventure.

On June 23rd, it was the 21st annual Scotiabank Vancouver Half Marathon, known as
Canada’s most scenic half-marathon. More than 6,500 participants ran past beaches and
mountains, finishing in Vancouvers beautiful Stanley Park. The race takes runners on a
scenic point-to-point course with a net drop of almost 300ft and a competitive elite field.
ORC lady Claudine Benstead ran a fantastic time of 1:31:21 to finish 1st lady in her age
category.

On Sunday six members of Team ORC, travelled to the ‘English Riviera’ to take part in the
Torbay Half Marathon. On a cooler day than the previous 2 years, many runners were
looking forward to completing the two-lap course following the seafront from Paignton to
Torquay. 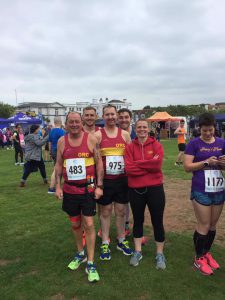 First home for Okehampton and finishing in 34th place overall was Hayden Bond. Setting an incredible new PB of 1.22.14.
Next to finish was the youthful Mike Westland with a time of 1.51.02, followed by Gaz
Williams finishing in 1.58.22.

Both Catherine Walker and Cameron Whitelaw revelled on the course and for the second
time in the space of 3 weeks finished with two massive PB’s. Catherine running in 2.09.58
and Cameron finishing a second later in 2.09.59.

Obligatory Ice creams and Fish & chips were enjoyed by all after.

Race report compiled by Jo Bradford with special thanks to Christine
Fritsch, Jane Jackson, Jeremy Tandy and Gaz Williams for their input