With just a week to the end of Okehampton Running Club’s awards year, members were out this week trying to fill in gaps in their awards charts or to upgrade ones they had. A one mile time trial was held on Tuesday evening with eight runners taking on the challenge to run a mile on the Granite Way as fast as possible. Six of these were new members to the club who hadn’t had a chance yet to get a one mile time, one of them, Jo Page, only having joined the club that evening. Ed Dumpleton had already done a time trial earlier in the year but his running has improved so much this year he thought he could better it, and he certainly did, knocking a sizeable 18 seconds off to set a new PB of 5.26 and upgrade his award to gold. All the newcomers ran well setting times they didn’t know they were capable of but would hopefully be able to improve on as they do more training, while Jane Jackson ran her first time trial for two years and was pleased to attain her platinum award. 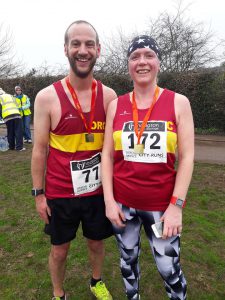 Three days later Ed Dumpleton and Jo Page ran the Fast Friday 10k in Exeter to have a crack at another distance that features in the club awards. The course of this aptly named two lap race on the roads around Exwick playing fields definitely has PB potential and both ORCs took advantage of it. Ed ran another PB, knocking over 30 seconds off his previous one to finish in 42.02 and come 2nd MV40, while Jo had never run a 10k before so simply aimed for a sub 50 minute run, but was very pleased and surprised with her finishing time of 47.54.

With just one day left in the club awards year they both then had a shot at their 5k times, running in different Parkruns. Ed did the Exeter Riverside parkrun where, despite a very wet and congested course he did score a hat trick of PBs in a week setting a new time of 20.15. Jo had a holiday in Wales for Easter, so she took part in the Penallta parkrun where she too set a new PB of 23.09.

The previous week two other ORCs went chasing 5k times at park runs, with Tom Andrew setting a new PB round the Tamar Lakes course with a time of 23.27, while Jane Jackson chose the relatively fast Barnstaple course where she achieved her platinum award with a time of 23.58. 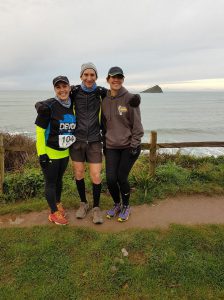 At the time of going to print Jo-Anne Turner, Alison Holliday and Roger Voaden were making their way across Dartmoor to bring their Dartmoor crossing Ultra to an end. Full details and the outcome of this will be shared next week.

Not forgetting the start of springs brings with it the regular weekend moor running. Well done Janet and Ruth for finding a break in the weather to get out on the moor.