On Sunday Okehampton Running Club members enjoyed a hugely successful day at the fifth anniversary of the Barnstaple Marathon and Half Marathon. Organised by North Devon Road Runners, this event has established itself as a fast flat route which is largely traffic free. Starting in Rock Park, the marathoners do an out and back to Chivenor, on the Tarka Trail, and then out to Fremington, with a road section from there to Yelland followed by a return on the Tarka Trail, the half marathoners doing the second half of the marathon course. Being on the estuary the weather can be influential on this race, but Sunday’s conditions were good being cool with only the later runners in the marathon having a strong headwind which had picked up for the second half of their race. 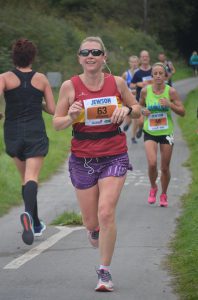 Jo Page was running her first marathon and despite good training times was only concerned about completing the distance. She did this in style with a stunning performance of well paced running to finish in an incredible 3.22.31, coming fifth lady and second in her age category also setting a new overall ladies club record for the distance. 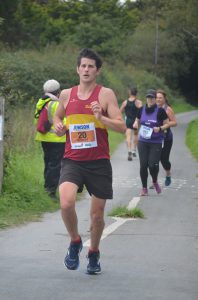 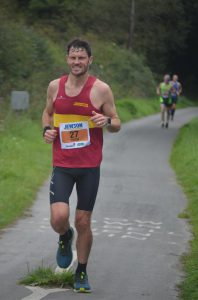 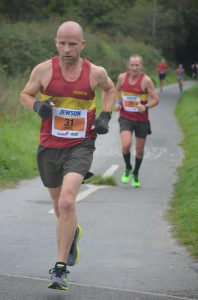 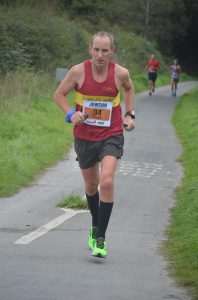 The race was won by the brilliant Adam Holland but Okehampton’s Rob Kelly ran a superb race, coming home second male and third overall, setting a new PB of 2.58.09. Hugh Robinson also set a new PB finishing in sixth place with a time of 3.04.37. He was followed by Vets Roger Voaden and Paul Carter finishing in 3.14.25 and 3.16.39 respectively. George Haskell has been improving his times recently and this was reflected in his time of 3.20.53, another PB. Graham Bryant was next in 3.28.00 with Jane Jackson, very relieved to complete having had limited training due to injury, coming home in 4.26.15 to be third FV55. 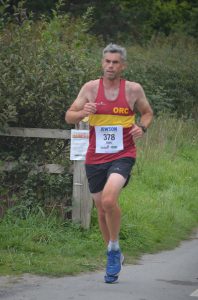 In the half marathon there were more successes with Alec Robinson first home for the club in 1.32.39, followed by Mark Hawkins, in his first race since his achilles injury over a year ago, to set a new PB of 1.38.56. Jo Bradford was keen to put the memory of last year’s run here behind her when she collapsed at the end of the race, but she is a totally different runner now having made huge leaps in improving her times. She finished in 1.48.07, a new PB by an incredible 18 minutes and 20 minutes faster than on this course last year.

Two other Okehampton runners set new PB’s this weekend, perhaps inspired by the challenges of their club mates. Jane Richardson set a PB at the Exeter Parkrun of 28.15 while John Binns ran a PB at the Tamar Lakes park run of 21.35.

Robert Richards took on a huge challenge to run his first 100mile ultra marathon this weekend. He completed this on Sunday evening after an amazing 34hours 33mins, a new PB of nonstop running/walking and we applaud his massive achievement, more will follow in next week report.