Last Thursday 22 athletes from the Junior section of Okehampton Running Club competed in an in-club sports day to record times and distances to mark the final training session of the year. The Junior section of the club started in November and this gave the young athletes the opportunity to set Personal Bests in running, shot put, standing long jump and foam javelin. Families were invited to stay and watch with some helping record the children’s achievements. Athletics Coach Rob Hicks has been impressed with the attitude and ability of the children who improved and developed their technique with every session. Feedback from children has been positive with some looking forward to training all week. The athletes will complete the same activities at the end of the Spring Term and it is hoped to see more improvements in their performance. 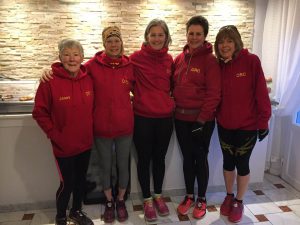 It was an exciting weekend away for five lady ORCs who travelled to Italy to run the Pisa marathon and Half Marathon. Once a maritime power to rival Genoa and Venice, Pisa now draws its fame from an architectural project gone terribly wrong. It has a fast flat course that starts at Miracles Square at the centre of Pisa and finishes next to the Leaning Tower of Pisa, following a beautiful route largely through the Tuscan countryside with the final few kilometres within the walls of the city. Two Orcs, Jackie Dawes and Deborah Cunningham ran the marathon, while Ruth Bushell, Kerry Morashti and Janet White opted for the half. On an uncharacteristically cold day they all ran well with Jackie Dawes having a superb race to come home first for the club in 3.54.29, an incredible 25 minute PB and a new club age category record. Deborah enjoyed this marathon much more than her previous one in the spring, finishing her 10th marathon in 4.52.09. In the Half Marathon all three ladies had good runs with Kerry Morashti finding some of her old form to finish in 2.05.03 to be the first ORC home. Ruth Bushell was just relieved that the achilles tendon problems she’s had didn’t spoil her enjoyment of the race, finishing in 2.30.02 with Janet White not far behind in 2.32.49.

Okehampton Running Club’s racing regulars Roger Voaden and Jo Page were in action again this weekend with Jo taking part in the Wellington Monument Road Race. Starting from the Catherine Wheel public house in the village square at Hemyock, the route climbs to, and circles, the Wellington Monument, returning along the same road to finish at the local primary school. At just over 10k it is quite a tough run, with a steep ascent in the first half before an equally steep but scenic return. Despite its title, it is officially multi-terrain as it incorporates about 1.5k of stone tracked bridlepath. Jo had a great run to finish in 44min 10 sec and very pleased to be third Lady.

Roger returned to one of his regular marathon routes, the Plym Trail Marathon, accompanied by Geoff Hill who keeps threatening to quit marathon running, before popping up in yet another one! Roger ran his usual good time to come third in 3.11.55 while Geoff was 13th in 4.11.01

Okehampton runner Angus Farrelly joined over 250 other runners on Saturday in PureTrail’s twilight run, Race The Light. This race is a shadowy 8.5 miles, meandering through Flete Estate’s secret tracks and trails along the Erme estuary. Starting at 3.30pm on the sand, the runners immediately get their feet wet as they cross the estuary on the outward leg. From there they follow muddy paths and tracks on the estate before returning to the estuary for the return crossing and a chance to wash all the mud off. Due to the heavy rain the river was higher than expected, but Angus managed to cross before the light had completely faded, finishing in 1.20.48.