Another fantastic turnout for the club not only with the runners but it was well supported by Marshals who always feature in the background but are hugely appreciated. Well done to everyone. The Granite Way races after having to be postponed due to the snow three weeks ago, the races finally went ahead last weekend in near perfect conditions with sunshine and just a slight breeze. 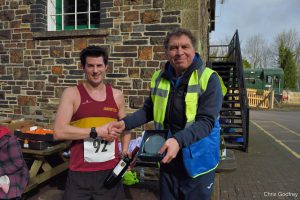 There are two distance options here, a 10 mile and a 20 mile, both starting and finishing at Okehampton Youth Hostel and following the Granite Way to beyond Sourton Church where they turn and head back, this being repeated a second time by the 20 milers. On such a beautiful spring day the views of the moors and open countryside made for some distraction from repeating the same route twice for those doing the longer run, which is often used by runners training for spring marathons as one of their last long runs, being fully supported with drinks stations and with a race atmosphere. Both races however are hotly contested by most of the runners, even those declaring it was just a training run! Our club had runners in both races with five taking on the 20 miler and seven doing the ten mile race which set off half an hour later to avoid congestion. The fast 10 milers however soon caught up with those having to pace for a longer distance, with Rob Kelly leading the way on the outward journey. In a very fast and close finishing race Rob was first home for the club eventually finishing third in 1:00:30, just seconds behind the second placed runner. This gave Rob his final diamond award and fulfilling his aim to achieve diamond awards at every distance this year. Andy Vernon was the next club runner home, coming fifth in 1.06.50 with Mike Baker, who entered after the disappointment of the “Grizzly” being cancelled, finishing well in 1.14.31. Tom Andrew ran a good time of 1.20.00 with Mike Westland not far behind with another good race to come home in 1.23.20, with Karen King, running her second race for the club, chasing him home in 1.23.40. Geraldine Walter and Jo Bradford ran together and were pleased to finish in 1.29.49 as Jo has been unwell and only got back to running a week ago.

In the 20 miler, won by Tavistock’s Adam Holland for the second year in succession, all the ORCs taking part were training for marathons, with Andrew Thorne the first of the five home, finishing in 2.43 33. Jackie Dawes was lucky enough to win the one club place for the London Marathon and is training hard to make the most of the opportunity and do herself and the club proud. This is the second time she will have done London and the second time she has run this race in preparation, coming home 16 minutes faster than previously to give herself a new PB of 2.57.30. Gareth Williams is running the Manchester Marathon in two weeks time and was happy to finish in 3.31.30, with Kathryn Volkelt-Igoe next in 3.37.40 to set herself on course for London and Deborah Cunningham in 3.42.00 aiming for the Great Well Marathon. 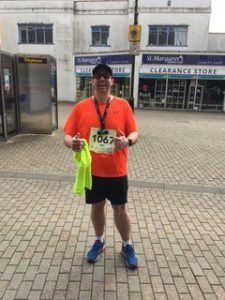 Liam Keen was the only Okehampton member running a different race on Sunday, taking on his first half marathon in Yeovil. This race starts in the town centre before heading along the entire length of Yeovil Country Park. The route then leaves the town on the western side to Montacute House, before returning on quiet country roads to a big town centre finish. Liam ran well to finish in 2.12.32.