Jeremy Tandy was racing this weekend, 44 miles from Lizard Point to Lands End along the South West Coast Path in the Endurance Life Classic Quarter ultra marathon in 8h16m58s of non-stop movement, 44.6 miles of which 2K were vertical, Jeremy finished in 8th place overall out of 186 finishers, 2nd in category MV45.
Hayden Bond won the Dartmoor trail half marathon in a time of 1.50.06 on Saturday. The course had views of Dartmoor while running through deeply rutted fields, woodland, and open moorland, with a lot of bogs and river crossings. The half marathon was a 2 lap course. With it not being a mass start no positions where known until the results came out. But huge congrats to Hayden for the surprise win!
On Saturday 5th September Chris Turner completed the Dartmoor 50 which didn’t officially go ahead this year but Chris completed the route or thereabouts in an impressive 11h47m. 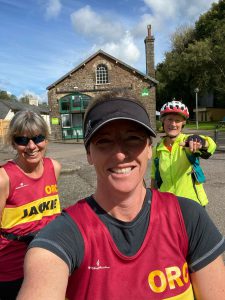 Jo Bradford and Jackie Dawes set out at 3pm on Sunday to complete the Virtual Granite Way 20 mile run as there were medals to be claimed after the race was cancelled in March. Staying true to the race, they ran out and back for 5 miles twice. They were also accompanied by fellow ORC Mags Jarvis who cycled the full 20 miles with them.