With the current restrictions due to the Corona Virus outbreak this year’s Chulmleigh Old Fair couldn’t go ahead in its usual format.  The fair is believed to be the longest running Charter Fair in England with 767 years without a break, including through 2 world wars so, determined to not break its continuity, it did go ahead in a reduced format. Included in this was the road race which became a virtual one with runners able to run the usual race route any time between last Tuesday and Friday. They recorded their times on the running Apps Strava or Garmin and sent them in to be assessed. Having won the race last year, Hayden Bond wanted to try and retain the trophy even if it was a virtual race, though running alone is very different to competing in a race with other runners. Karen King also ran this year and both ORCs did very well, Hayden completing the 2 mile course in 12min14sec to set a virtual course record and retain the Cup, while Karen’s time of 20.13 was enough to secure the first Ladies place. 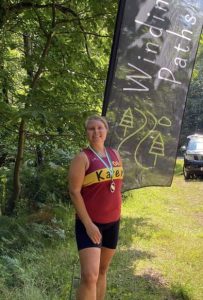 On Sunday Karen was the first Okehampton runner to take part in a race held under restrictions due to the Corona Virus, running the Winding Paths 10k in the woodland of Grammarcombe woods near Ashcombe. It was a two lap race with challenging ground in places and a steep uphill at the end of both laps which Karen completed in 1.08.50 to claim her first trail race medal.