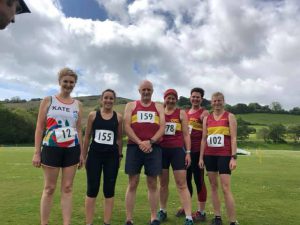 The name aptly describes this typical fell race, where the runners struggle up one hill to then immediately descend it the other side and then repeat this with the second hill after negotiating the bog that lies between them. Okehampton Running Club was well represented here with eleven runners all enjoying the three mile course with it’s 1,100ft of ascent. First home was young Mathew Richards, flying up and down the hills to c 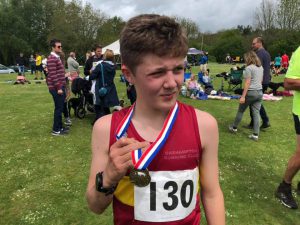 Anne Binns was hoping for a good run at the Edinburgh Marathon where she had run her  marathon PB in 2016, but sadly things didn’t go so well for her here this year. The course which starts in Edinburgh and follows the coastline south to Musselburgh can be susceptible to the wind and the runners had been issued a weather warning for severe winds on race day, but having run her previous race in in similar conditions Anne thought she could cope with this. Unfortunately though she became unwell after 15 miles but continued on at a slower pace to finish in still a respectable time of 4.17.12.

The Dartmoor Discovery, or DD as it is affectionately known, is the longest single lap UK road ultra marathon. 32.5 miles in length with just under 4000ft of elevation.
6 ORC’s took to the course on a warm day with varying degrees of success. Simply getting round the course is an achievement in itself, the DD is known as fairly brutal and it lived up to expectations! 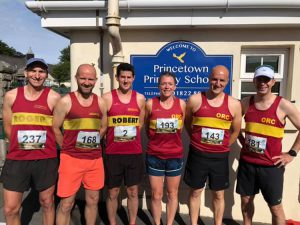 Okehampton’s super fast lady vet, Claudine Benstead, set yet another personal best and age group club record at the Exeter Riverside Parkrun on Saturday. In warm conditions she stormed round to finish in 19min 41sec giving her an impressive age-graded percentage of 95.85%. 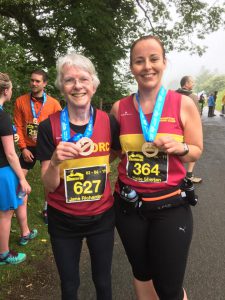